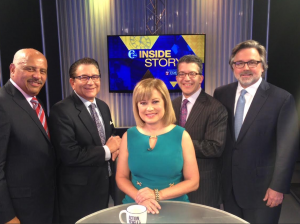 Our guest is Majority Whip Rep. Bryan Cutler. Tony May, Charlie Gerow and John Micek of the Patriot-News are here for commentary.

Host Monica Malpass and our Insiders give a ‘Post Election Recap’. They discuss what the new Jim Kenney Mayoral administration will look like and what new ideas are likely to be instituted. Plus they discuss the new faces coming to City Council and how the Democratic Sweep of the PA Supreme Court will affect policy change in the region. Also on the topics table, Dwight Evans announcing plans to challenge Chaka Fattah’s congressional seat and the legal issues for Chaka Fattah, Jr. and Attorney General Kathleen Kane. Catch the Inside Story.

A historic Supreme Court election took place on Tuesday, Nov. 3, when three new state Supreme Court justices were chosen by voters, all Democrats, changing the majority of the court. Two other Democratic appellate court judges were also chosen, one on Superior Court and one on Commonwealth Court. These new members will serve 10-year terms. Also, a new Philadelphia mayor was elected, and a special election was held for an open state Senate seat. Panelists also discuss the upcoming 2016 election, the state budget impasse and the latest news on embattled Attorney General Kathleen Kane. Our guests this week are Melissa Daniels, staff reporter with the Pittsburgh Tribune-Review; Dave Davies, senior reporter with Philadelphia’s WHYY-FM; and John Micek, Editorial & Opinions Page Editor with Pennlive & The Patriot-News. Our host is Francine Schertzer. Link here.

This Sunday morning at 8:30 a.m. (new time, during the NFL Football season, on CBS and KDKA-TV), on the “KD/PG Sunday Edition”, we’ll hear from members of both the Republican and Democratic leadership in Pennsylvania’s state house – about the budget impasse. Our guests include Rep. Mike Turzai (R) 28th Legislative District, including Marshall Township, who is also Speaker, and Rep. Frank Dermody (D) 33rd Legislative District, including Oakmont – who is also House Democratic Leader.

Why is it taking so long, to approve a state budget – and what are the stumbling blocks? When can we expect final approval of a budget? What is the future of Pennsylvania’s State Stores, and their employees – in budget discussions?

WGAL Channel 8 (Harrisburg and Lancaster) Sunday, November 8th at 11:30 AM

On this Sunday’s broadcast, we’ll talk about the growing impact of steel and aluminum imports into the United States from China – that may be responsible for the eventual destruction of much of America’s manufacturing sector. U.S. Steel just reported a third-quarter loss much larger than originally anticipated – and lowered its financial expectations for the remainder of the year.

ALCOA – major aluminum manufacturer in the United States – cut back its production, and there is some likelihood that smelting plants in this country could be closed, next year, if the slump in the American aluminum industry continues.

What’s being done, to address the challenge?

We’ll talk with Kim Miller – Director of the United Steelworkers’ Rapid Response Education Network – to find out what labor and management are doing – together – on the political front – to fight Chinese imports.

Then, we’ll introduce you to the new CEO of the Pittsburgh AIDS Task Force – Sean DeYoung – and information from him, on how – after thirty years of operation – the Task Force is changing the way it delivers services to its clients. It will mark the largest expansion initiative in the organization’s history.