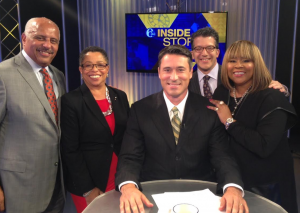 Senate Majority leader Jake Corman joins us for our first show that goes statewide on PCN.  We’re talking about the state budget just days after the House shot down Gov. Wolf’s tax proposal. What happens next? Tony and Charlie are here too for their expert analysis.

Join host Matt O’Donnell and the Insiders as they discuss how the PA State Budget vote goes bust again. The GOP rejects Governor Wolf’s latest effort and the impasse goes over 100 days. We discuss where we go from here as many school districts and social services start taking hits. Topics also discussed were how many people actually came to see the Pope, a quiet Mayor’s race and we remember long time Inside Story Panelist, Journalist and Civil Rights Activist Jerry Mondesire. Inside Story…Sundays at 11:30 a.m.

The PA budget impasse continues into a fourth month. On Wednesday, the state House voted down – by a 73-127 vote – some of the key elements of Gov. Tom Wolf’s revenue proposal: a Marcellus Shale extraction tax, an increase in the personal income tax from 3.07% to 3.57%, and $400 million in property tax relief awarded through the state’s Property Tax Rent Rebate Program. Also, the panel will discuss Attorney General Kathleen Kane, who was charged with a second felony for perjury last week, was also sued by a former employee she fired. Guests this week are: Brad Bumsted, Pittsburgh Tribune-Review; Karen Langley, Pittsburgh Post-Gazette; and Robb Hanrahan, with CBS 21 News and Anchor of “Face the State.” Our host this week is Brian Lockman. Link here.

After winning close to 100-games, in the regular season – the Pittsburgh Pirates find themselves out of post-season play, including the World Series – following a 4-0 shutout loss to the Chicago Cubs, and high-priced pitching ace Jake Arrieta.

What does the future hold, for the Pirates – who have failed to get to the finish line, for the third time, in recent years?  Will the Bucs be able to keep Neil Walker, Pedro Alvarez, and recently acquired, left-handed pitcher J.A. Happ, on their roster, for next season?

We’ll ask Michael Sanserino – Sports Editor of the Pittsburgh Post-Gazette – and Dan Zangrilli – Pre-Game and Post-Game Host of Pittsburgh Pirates’ baseball coverage on CBS Radio’s 93.7 The Fan, in Pittsburgh – about the economics of baseball – and the state of sports – in the smaller, Pittsburgh market.

WGAL Channel 8 (Harrisburg and Lancaster) Sunday, October 11th at 7:30 AM

On this Sunday’s broadcast, we’ll look at the growing effects of the Pennsylvania state budget impasse, on school districts in Southwestern Pennsylvania. Many of them have been forced to borrow money, in order to meet payroll. Our guest is former Pittsburgh city councilman and school board member – Patrick Dowd, Ph.D. – Executive Director of “Allies for Children” – a non-profit, education advocacy group.

Then, we’ll show you the brand-new, Tower at PNC Plaza, which officially opened, in Downtown Pittsburgh, last week – one of the “greenest” office buildings in the world! We’ll also ask Mike Gilmore – PNC’s Director of Design and Construction Services – in our studios — why environmental sustainability is so important to PNC’s corporate model, and to the success of its workforce!

Finally, Marick Masters, Ph.D. – Director of Labor Studies at Wayne State University, in Detroit, Michigan – talks with Jon Delano about the state of the labor industry – and the auto industry – specifically. Masters shares his thoughts on recent negotiations between the United Auto Workers and Fiat/Chrysler – which led to an announcement – this week — of a tentative agreement, on a new contract.

Masters – whose background includes significant work at the University of Pittsburgh’s Katz Graduate School of Business – also shares his thoughts about the role of organized labor, in Campaign 2016.