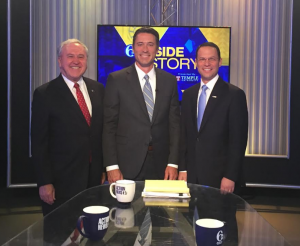 This week we sit down with PUC Chairman Gladys Brown. RJ Harris fills in for Charlie Gerow.

It’s a Special Inside Story Candidates Forum, as Host Matt O’Donnell moderates a discussion between the candidates for Pennsylvania Attorney General. Democrat Josh Shapiro and Republican John Rafferty sit at the table to discuss a myriad of issues facing commonwealth including criminal justice reform, opioid addiction, pot legalization, stop and frisk, and gun control.  They also offer their stance on resigned AG Kathleen Kane, releasing further porngate emails, and do they support their party’s presidential nominee.

Journalists Roundtable is in Pittsburgh this week at the offices of the Pittsburgh Tribune-Review. The second presidential debate is in the books. Western Pennsylvania has been a frequently visited location by both the Trump and Clinton campaigns, including the first post-debate rally in Ambridge, Butler County, about 40 minutes northeast of Pittsburgh. With less than four weeks remaining until the general election, we’ll examine the impact of the election locally, as well as the paper’s coverage of state elections and politics. This week’s guests are Pittsburgh Tribune-Review reporters Tom Fontaine and Kari Andren, and Assistant Metro Editor Donald Gilliland. Our host this week is Brian Lockman.

On this week’s program – the political fallout, from videotape material from 2005, which recently surfaced, in which Republican Presidential nominee Donald J. Trump – then, a television reality show personality – talked about his attraction to women. We’ll look at the impact of Trump’s comments on the Presidential campaign. We’ll also examine the implications of more Hillary Clinton campaign e-mails – released by Wikileaks – and how this will affect Clinton’s own campaign.

Do not miss this lively and timely political discussion – Sunday morning at 8:30 a.m., on KDKA-TV’s “KD/PG Sunday Edition”!

This week’s Pennsylvania Newsmakers features journalists Angela Couloumbis of the Philadelphia Inquirer, and Katie Meyer of WITF, who discuss the return of the state legislature and the U.S. Senate race. Then, joining host Terry Madonna are Patrick Conway, CEO of the Pennsylvania Credit Union Association, and Carrie Wood, CEO of Timberland Federal Credit Union, to discuss International Credit Union Month and tips to increase savings and reduce debt. Link here.

On this week’s broadcast – the aftermath of Hurricane Matthew, on the people of Haiti, and residents of Florida and North Carolina. We’ll talk with Luke Hingson – President of the Pittsburgh-based Brother’s Brother Foundation and Jayson Samuels – Major Gifts Manager for Hopital Albert Schweitzer, in Deschapelles, Haiti  – about relief efforts from our area, for hurricane victims – from medical supplies – to bottled water, and cleaning equipment.

Then, a problem that many people may not associate with Pittsburgh: the plight of homeless children and teens. Familylinks is taking part in an important summit – next month – to address this issue. Our guests – Frederick Massey Jr. – CEO of Familylinks – and Lenny Prewitt – Program Manager for Familylinks Outreach Center & Shelter – will tell you more about the Pittsburgh homeless youth population and the services that Familylinks provides, to them.

Finally, we’ll mark the 50th anniversary of the Community College of Allegheny County (CCAC) and meet Quintin Bullock, DDS – their president. Since the college opened its doors – in October, 1966 – Community College has changed thousands of lives, and provided educational and professional opportunities to many, who would never have been given the chance for a college education.