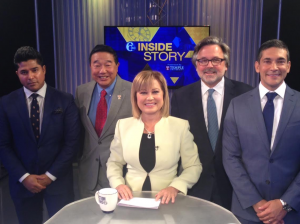 State Rep. Ed Gainey of Allegheny County is here and talking about medical cannabis legislation and where it stands in PA as well as the budget situation. Tony, Charlie and R.J. Harris from WHP 580 will also provide commentary.

Host Monica Malpass and the Insiders talk about Philadelphia Police Commissioner Charles Ramsey announcing his retirement. They discuss the praise and criticism from his 8 year career here in Philadelphia and what remains to be done to improve police and community relations. Topics also tackled include the on-going PA budget battle, the effectiveness of the Black Lives Matter movement, the Philadelphia School District’s dearth of substitute teachers, the SRC under fire, the latest in the “porngate” saga and will City Council’s increasing pressure on cigarette sales make an impact on public health.  Inside Story, from left to right, but always local. Sunday at 11:30 a.m.

After the governor’s revenue plan was rebuffed in the House last week, what’s next for budget negotiations? Judicial politics is in the forefront with an election just weeks away and a new batch of emails released by Attorney General Kathleen Kane, which resulted in a statement of apology being issued by sitting PA Supreme Court  Justice Michael Eakin this week. The Senate was in session and passed a bill that would prohibit union dues from being collected from public employee paychecks. Our guests this week are: Chris Comisac, Bureau Chief with Capitolwire; Marc Levy, with the Associated Press; and Tony Romeo, reporter with KYW and KDKA radio.  Our host this week is Larry Kaspar. Link here.

This Sunday morning at 8:30 a.m., (new time period, during the NFL season) on KDKA-TV’s “KD/PG Sunday Edition” broadcast – with KDKA-TV News Anchor Stacy Smith and John Allison – Associate Editor of the Pittsburgh Post-Gazette – we’ll look back at the first Democratic Presidential debate, in Las Vegas, last Tuesday – and discuss who was helped and damaged – by their participation. We’ll also talk about one person noticeably missing from that debate – Vice-President Joe Biden – who was still deciding whether to enter Campaign 2016’s Presidential race – and when.

Our guests are former Executive Secretary to the late Pittsburgh Mayor Sophie Masloff – Joe Mistick, J.D. who is Associate Professor at Duquesne University’s School of Law – and James Burn, Jr, J.D. – past Chairman of the Pennsylvania State Democratic Committee.

WGAL Channel 8 (Harrisburg and Lancaster) Sunday, October 18th at 7:30 AM

This week’s Pennsylvania Newsmakers features a discussion of the expansion of gaming in the state, the lateness of the state budget, and an update on the pornographic email scandal with journalists Angela Couloumbis of the Philadelphia Inquirer and Karen Langley of the Pittsburgh Post-Gazette. Then, joining host Terry Madonna are Patrick Conway, President and CEO of the Pennsylvania Credit Union Association, and Bob Marquette, CEO of Members 1st Federal Credit Union, for a discussion of International Credit Union Month. Link here.

On this Sunday’s broadcast – major progress, in an effort to stem the flow of heroin into Washington County, Pennsylvania – which resulted in multiple deaths, last summer. Washington County District Eugene Vittone talks about a combined federal-local investigation, that resulted in the arrests – this past week — of two men believed to be involved in the drug trafficking that led to last summer’s deaths. Vittone says this is just the beginning of the investigation.

Then, we’ll tell you about an impressive effort to build an interactive park at Pittsburgh’s Station Square, to educate visitors about the rich heritage of the Negro Baseball League. Our guests include Hal D. Coffey – Chairman of the Board of Directors of the Josh Gibson Foundation (Josh was a catcher, and played for the Homestead Grays and the Pittsburgh Crawfords in the Negro Baseball League in the 1930’s and 1940’s, before Jackie Robinson broke the color barrier in Major League Baseball – in 1947, and was also the second player from that league — after Satchel Paige — to be inducted into the national Baseball Hall of Fame), and Meredith Miller – Manager of  Public Relations for FEDEX Ground in Pittsburgh – which is a major contributor to this project.

Finally, we’ll try to make some sense out of the recent wave of corporate mergers – including efforts by Dell to purchase EMC – and Anheuser-Busch In-Bev – to buy SAB Miller. It’s estimated that so far, this year, there have been at least three and a half-trillion dollars spent in corporate merger transactions. We’ll talk about the reason for these mergers – from technology – to beer – with Robert Morris University’s Associate Professor of Management – Marcel Minutolo, Ph.D.