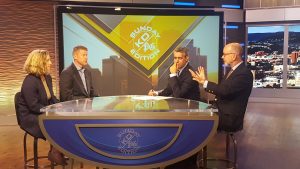 House Republican Deputy Whip Jesse Topper (R-Bedford/Franklin/Fulton) talks budget and the prospect for a speedy (albeit 3 months late) resolution. Longtime Capitol reporter Brad Bumsted of the Caucus is in to talk about some of his more noteworthy investigations and his new print-only publication bucking the trend of a digital-only world. We focus on the expenses of Lt. Governor Mike Stack, the influence of lobbyists, and the costs of all those Pennsylvania municipalities and school districts.

We are digging deeper in the NFL Players Protest with former Eagle Barrett Brooks and Eagles Insider Dave Spadaro.  We are also discussing the history of the Pledge of Allegiance with a local historian. You may be surprised by what you learn. 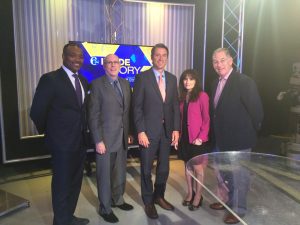 Matt O’Donnell and our Insiders discuss the NFL protests sweeping the nation and the world, Philadelphia unveiling the Octavius Catto statue outside of City Hall, and Russian hackers who tried to target the PA election system.  Catch the Inside Story Sunday at 11:30am on 6abc.

On this week’s broadcast – what will it take – to bring a new Amazon headquarters, to the Pittsburgh area? We’ll hear two, important perspectives about efforts to restructure Pittsburgh’s economy and image, for the 21st Century.

Our guests include Susan Everingham – Director of the Pittsburgh Office of the RAND Corporation, and a Senior Policy Analyst at RAND’s Pittsburgh office, who moved to Pittsburgh in 2008, from RAND’s Santa Monica, California headquarters. RAND came to Pittsburgh, in the year 2000 – and now has 250-members of its staff, in Pittsburgh. She’ll share her thoughts, about the factors that help RAND decide to locate a campus in Pittsburgh, and some of the challenges faced – in convincing Amazon to establish a headquarters, in the city.

Also, with us, is Shawn Fox, President of RDC, Inc. – a real estate development company, with experience in providing mixed-use, commercial, and residential real estate. Among his current projects, is an ambitious development, in Pittsburgh’s Strip District – called: “D15trict Fifteen”.  Fox worked as Chief of Staff, to former Allegheny County Chief Executive Dan Onorato, on economic development and policy initiatives, including sustainability.

Please join Ken Rice and John Allison, for this important and timely broadcast, Sunday morning@8:30AM., on the “KD/PG Sunday Edition”, on KDKA-TV!

WGAL Channel 8 (Harrisburg and Lancaster) Sunday, October 1st at 11:30 AM

This week’s Pennsylvania Newsmakers features a business panel with Gene Barr, President and CEO of the Pennsylvania Chamber of Business & Industry, and David Taylor, President of the Pennsylvania Manufacturers’ Association, for a discussion of the state and national economy, and the possibility of Amazon locating their second headquarters in Pennsylvania. Then, joining host Terry Madonna is Bob Latham, Executive Vice President of Associated PA Constructors, to discuss the progress and funding of the multifaceted infrastructure repairs underway. Link here.

The heated competition, across America, and beyond, to locate another Amazon headquarters – with potential of thousands of jobs, for communities. What are the City of Pittsburgh and Allegheny County doing, to stay in the race – and what could a new, Amazon location mean, to Southwestern Pennsylvania? We’ll ask a man, in the center of strategy sessions, for the City of Pittsburgh’s bid – Kevin Acklin – Chief of Staff, to Pittsburgh’s Mayor Bill Peduto.

Then, we’ll tell you why Pittsburgh’s remarkable story of its transformation – from the center of smog – in the 1940’s and 1950’s  — to one of America’s “greenest” cities – is going to be made available, to the world – on-line. Our guest is Aurora Sharrard, PhD, LEED, AP BD+C – Executive Director of the Green Building Alliance – whose creation – pittsburghgreenstory.com – is the modern vehicle, to remake Pittsburgh’s image – as much as the actual change, in its skyline and air quality.

Finally, a bonanza, for qualified students, in the Pittsburgh Public Schools, hoping to take advantage of scholarship money, provided by “The Pittsburgh Promise”.  Through a new collaboration, with nineteen different colleges and universities – students may become eligible for additional grants, to help pay for the cost of room & board, and books. Saleem Ghubril – Executive Director of “The Pittsburgh  Promise” – and Kellie Laurenzi – Associate Vice-President of Enrollment, at Robert Morris University – one of the “Promise” ‘s Pittsburgh Admissions Collaboration – will give Jon Delano the details, of this new, initiative.