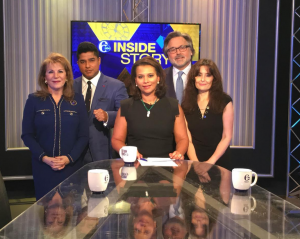 Host Tamala Edwards and the Insiders take on the calls for a ‘rigged election’ in Philadelphia, specifically, by presidential nominee Donald Trump.  What will this mean on election day…At the polls here in Pennsylvania? Other topics include how the last presidential debate did or did not appeal to suburban women, the latest on the race for PA Senate, should Kathleen Kane get leniency in sentencing and discussion on a Pew Charitable Trusts’ survey on what concerns Philly residents most.

Journalists Roundtable travels to Reading this week to meet with reporters from the Reading Eagle. The third presidential debate will occur October 19 in Las Vegas. Pennsylvania continues to be a frequently visited battleground state by both the Trump and Clinton campaigns and their supporters. Less than three weeks remain until the general election. This week’s guests will be Reading Eagle News Editor Ron Southwick, and reporters Karen Shuey and Liam Migdail-Smith. Discussions examine the impact of the election locally, as well as the paper’s coverage of state elections and politics. Our host is Brian Lockman.

With the end of Campaign 2016 nearing, we’ll talk with Jay P. Cost – Senior Writer for the Weekly Standard – a conservative magazine – and Andrew Simpson, Ph.D. – Assistant Professor of History at Duquesne University – about controversy that continues to plague both Donald J. Trump and Hillary Clinton, in their quest for the Presidency, whether the American people can have confidence that the election will not be “rigged”, as Trump suggests, and what the future holds for both the Democratic and Republican parties, after the election.

This week’s Pennsylvania Newsmakers features journalists Karen Langley of the Pittsburgh Post-Gazette, and Mike Straub of WGAL-TV, who discuss the row office elections—Auditor General, Treasurer, Attorney General—and the movement of sanctuary city and gun legislation in the state legislature. Then, joining host Terry Madonna is Angela Liddle, President and CEO of the Pennsylvania Family Support Alliance, for an update on child abuse prevention. Link here.

This week on PMA Perspective David Taylor is joined in the studio by Senator Pat Toomey for an exclusive newsmakers interview. The show concludes with “Final Word” commentary from PMA’s Chairman of the Board, Mr. Fred Anton.

The United Way of Southwestern Pennsylvania has made a difference in the lives of thousands of people, in our area. Now, corporations and individuals, who want to contribute to the United Way, can see the direct impact that their dollars will have – on special causes.

Our guests include Jerry MacCleary – President of Covestro LLC of North America – and Diane Holder – President & CEO of UPMC Health Plan, President of UPMC’s Insurance Services Division, and Executive Vice-President of UPMC. They are corporate leaders – in this year’s United Way of Southwestern Pennsylvania annual campaign.

Then, the University of Pittsburgh’s Brain Institute will reap the benefits of both – a major gift from the Henry L. Hillman Foundation – and a significant grant from the National Institutes of Health (NIH).

The money will be used, to help the advance research on normal brain function, and a number of disorders affecting the brain. We’ll talk with Nathan Urban, Ph.D. – Associate Director of Pitt’s Brain Institute, Professor of Neurobiology, and Vice-Provost at Pitt – and Colleen McClung, Ph.D. – Associate Professor of Psychiatry at the University of Pittsburgh, and a researcher at Pitt’s Center for Neuroscience – about the kinds of groundbreaking research that are being done at the Brain Institute.

Finally, Pittsburgh Life Sciences Greenhouse is providing vital funding for a Pittsburgh, South Side start-up company that hopes to make a difference, in the fight against Alzheimer’s Disease – which could affect as many as 16,000,000 Americans, by the year 2050.

Initial, clinical drug trials have begun in Australia, for a drug being developed by Cognition Therapeutics, Incorporated – which the company says, has been shown to stop or slow the progression of Alzheimer’s, in humans.