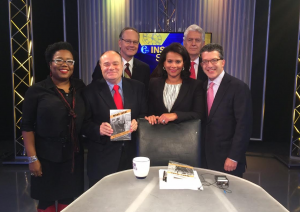 We have State Rep. Mike Regan of the 92nd district on the show this week. Tony is here for Democratic analysis, WHP 580’s RJ Harris is filling in for Charlie. We’re talking about the Rep’s Senate run, medical marijuana and the state budget.

Face the State is moving to a new time on CBS 21. It will begin to air this week at 8:30am. NEXT WEEK We’re still going on CBS 21 at 8:30am, ALSO the show will be on PCN at 9am. That will be the schedule next week and moving forward.

Host Tamala Edwards and our Insiders discuss the kudos and criticisms of the recent Papal Visit along with the lingering statements by Archbishop Chaput about the church’s’ sex abuse scandal. And what about that secret meeting with Kim Davis and that glass of [holy] water and our  Representative Bob Brady?  Also on the table…Attorney Kane’s new charges of perjury, why prosecutor Frank Fina is still working in the D.A.’s office, and reflections on Philadelphia Magazine’s October cover photo misstep. Exclusive: The show begins with an interview with legendary Philadelphia LGBT Activist and Journalist Mark Segal touting his new book ‘AND THEN I DANCED: Traveling the Road to LGBT Equality’. Hear how his most memorable protests affected change in the country’s Gay Rights arena.

The stopgap budget proposal was vetoed Tuesday by Gov. Tom Wolf. Republicans in the General Assembly continue to say there are no GOP votes for higher taxes. Meanwhile, Democrat leaders have been trying to muster enough votes from the other side of the aisle to support some of the governor’s tax proposals. GOP leaders said if they do, they will run a tax bill. Wolf has made counter proposals on liquor privatization and pensions. Auditor General Gene DePasquale and Senate GOP leaders have released a list of school districts that will soon run out of money. Also, Attorney General Kathleen Kane was charged with a second felony for perjury Thursday. Guests are R.B. Swift, Harrisburg Bureau Chief, Times-Shamrock Communications; Christen Smith, Staff Writer, Capitolwire.com; and Christian Alexandersen, State House Reporter, Pennlive and the Harrisburg Patriot News. Our host this week is Brian Lockman. Link here.

On Sunday’s broadcast, reflections on Pope Francis’ historic visit to the United States , from three people fortunate enough to be an eyewitness to history, and the Pope’s trip to Philadelphia, last weekend.

WGAL Channel 8 (Harrisburg and Lancaster) Sunday, October 4th at 7:30 AM

On this week’s broadcast, Duquesne University hosts a significant conference on environmental sustainability, following Pope Francis’ historic visit to the United States, and his support for this goal, in an address before the United Nations’ General Assembly.

We’ll talk with Robert Sroufe, Ph.D.– Professor of Operations and Supply Chain Management, and the Thomas Murrin Chair, in Global Competitiveness, at Duquesne’s Palumbo Donahue School of Business — about the challenge in supporting sustainability and working with the business community, whose goals on this issue may not always coincide with that goal. Dr. Sroufe was a presenter at the Conference at Duquesne — whose longstanding commitment to sustainability is part of their Spiritan religious mission.

Then, could a REGIONAL transportation system EVER become a political reality in Southwestern Pennsylvania, historically-known for what some would call “provincialism”?

Regional transportation works quite effectively, in Southeastern Pennsylvania — across the Commonwealth of Pennsylvania.

We’ll ask Chris Sandvig — Regional Policy Director of the Pittsburgh Community Reinvestment Group — about creation of a Regional Transportation Alliance,  in the Greater Pittsburgh area, whether it could become a political reality, or remain a pipedream, and if it can bring people — to jobs — in Southwestern Pennsylvania.

Finally, a critical media campaign, to fight drug overdoses and prescription drug abuse, in Pennsylvania — whose STATEWIDE drug overdose rate is higher than the national average.

Our guests include Kathrine Muller — Project Coordinator for the Commonwealth Prevention Alliance — and Scot Fleming — Creative director of “Boom Supercreative” — a local media firm — about what’s planned, in the “STOP OPIATE ABUSE CAMPAIGN” — to make a difference.