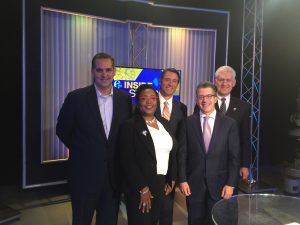 We talk about the explosion over the budget that happened this week at the Capitol. The governor’s mad at House Republicans who are mad at House Democrats. Meanwhile, revenue to fund the budget is 3 months overdue and counting. We’ll also discuss a story we broke this week about last year’s cheating scandal at the State Police Academy. A trooper was among the 40-some men and women who were forced to resign or were fired. Our investigation showed he did not cheat. Lawsuits could be coming. Our analysts discuss a claim by Governor Wolf that politics are causing the budget impasse and that legislative Republicans “would rather see me fail than Pennsylvania succeed.” Is that true? Tune in to find out.

This week we are looking at the impact the President’s Tax reform plan will have on your bottom line. Who saves?  Who pays more?  We’ll break it down with a local professor.

Host Matt O’Donnell and our Insiders discuss New Jersey lawmakers proposing a ban on ‘bump stocks’ in the wake of the Las Vegas mass shooting.  Other topics include the PA budget stalemate and the idea of the ‘endangered moderate Republican’ as more Congressmen announce their retirements.  Catch the Inside Story … Sunday at 11:30 am on 6abc.

An important discussion, about the decision,  this week, by Republican Congressman Tim Murphy, Ph.D. – from the 18th Congressional District, to resign from office, after the Pittsburgh Post-Gazette disclosed details of a sexual scandal, involving Murphy, and a mistress, and allegations of mistreatment by Murphy, of his office staff members.

Our guests include former Pennsylvania Congressman Jason Altmire, (D) PA. 4th CONGRESSIONAL DISTRICT (NOW, DEFUNCT), FROM 2007-2013, who served in the Western Pennsylvania Congressional delegation, with Rep. Tim Murphy.  Altmire, who was defeated, in 2012, in a gerrymandered, new Congressional district race, against Republican Keith Rothfus, has written a new book, about the political gridlock in America – “Dead Center: How Political Polarization Divided America and What We Can Do About It”. He now lives in Ponte Vedra Beach, Florida, near Jacksonville.

Also, with us, is KDKA-TV’s Money & Politics Editor Jon Delano, who broke the story that Rep. Tim Murphy had decided not to seek re-election, next year. The following day, after meeting with Speaker of the House Paul Ryan, Murphy announced that he would resign from office, on October 21st.

WGAL Channel 8 (Harrisburg and Lancaster) Sunday, October 8th at 11:30 AM 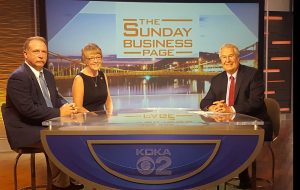 We’ll hear from two people, who have just returned from emergency relief work, in Houston, Texas and Key West, Florida, after the devastation from Hurricane Harvey and Hurricane Irma. Jon Delano talks with Sandra Stein – a veteran, American Red Cross volunteer, from McCandless, who is a retired special education teacher from North Allegheny High School. Sandra served as a shelter manager, at Houston’s George R. Brown Convention Center, where thousands of people received temporary housing, food, and shelter, when their homes had to be evacuated, from hurricane flooding.

We’ll also meet Robert A. Skertich, PhD – Associate Professor of Public Administration, at Point Park University’s Rowland School of Business. As part of his service, for the National Disaster Medical System (NDMS) – Rob helped to support the existing healthcare facilities, in Key West – after Hurricane Irma struck that area – and was part of a team that established a temporary hospital, in the parking lot of their local community college, and treated 50-60 patients, each day, for a week.

Finally, we’ll find out why Community College of Allegheny County (CCAC) is excited about a new workforce initiative, to prepare its students for the 21st Century workplace – and the growing demand for graduates, who are trained in science, technology, engineering, and math skills – or, STEM.  Quintin Bullock, DDS – President of CCAC – will tell us about ambitious plans, for a brand-new, workforce training center, on CCAC’s Allegheny Campus, on Pittsburgh’s North Side.