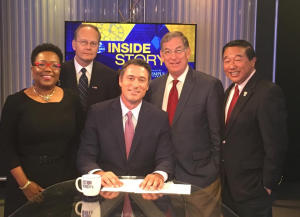 Host Matt O’Donnell and our Insiders dive deep in to the local campaigns and how it will impact the region as election day draws near. Is Pennsylvania still a battleground state as recent polls show Clinton pulling away from Trump? It’s official – The PA Senate Race is one of the most costly – but can McGinty pull enough voters from a strong incumbent in Toomey. Plus the Attorney General’s race heats up, and it looks like Philadelphia’s District Attorney might have many challengers when he runs for re-election. From left to right…but always local…catch the Inside Story – Sundays at 11:30 am.

On this week’s program – the difficult strike by members of the Pittsburgh Symphony Orchestra, and the general state of financial support of the performing arts – in this community, and across the country.

The strike began on September 30th, performances have been cancelled for the Pittsburgh Symphony, through the end of October, and no new bargaining talks have been scheduled.

Please join Stacy Smith and David Shribman, for this important and timely discussion – Sunday morning at 8:30 a.m., on the “KD/PG Sunday Edition”!

This weekend marks an important transition in local banking, as First Niagara’s name disappears – replaced by the Cleveland-based Keybank – which officially makes its debut, in the Southwestern Pennsylvania area. On August 1st, KEYCORP paid First Niagara Financial almost one and a half billion dollars – to acquire the company, as well as First Niagara Bank – which has approximately 60-branches and 600-employees, in the Pittsburgh area.

How will the account switchovers take place, and what does all of this mean, to consumers, and to the local banking industry?

Then, a close look at the importance of partnerships between education and high-tech – in the Pittsburgh community. One of the newest high-tech “stars” – Google – with about 500-employees at its Bakery Square headquarters, in Pittsburgh’s East End – and the Pittsburgh Public Schools – partnered – to promote a Google “Geek Street Fair”, at Google’s local headquarters, this weekend.

Kamal Nigam, Ph.D. – Engineering Director for Google Pittsburgh – and Anthony Hamlet, Ed.D. – Superintendent of the Pittsburgh Public Schools – join Jon Delano, to talk about the vital importance of introducing students to STEAM (Science, Technology, Engineering, and – adding the Arts, to Mathematics) education – to improve student performance, and also create the most qualified workforce of the future.