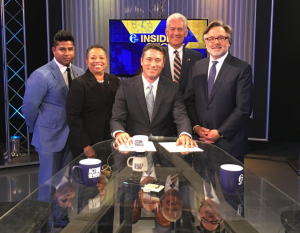 Host Matt O’Donnell and our Insiders had a rousing discussion on the PA School State Funding issue that has been elevated to court. What should the correct funding formula be and what are the legislator’s responsibilities in equity amongst poor versus wealthy districts. Also discussed, the Kaepernick debate comes to Woodrow Wilson HS in Camden, NJ as the football team takes a knee, PA remains a battleground as both President Obama and Trump stomp here, plus the PA Senate race continues to be one of most watched races in the country. Catch the local political stories…Sunday at 11:30 a.m.

On this week’s program, we’ll examine the issue of the physical health of the candidates for President of the United States, in the wake of Hillary Clinton’s recent bout with viral pneumonia.

How much does the public have the right to know – about a candidate’s personal medical record? Why is the physical health of presidential candidates such an important factor that voters may evaluate, in deciding their choice for President?

Our guests include Brian M. Lamb, DO – Internal Medicine, West Penn Medical Associates – part of the Allegheny Health Network – and a Doctor of Osteopathic Medicine – and John Hanley, Ph.D. – Assistant Professor of Political Science, at the McAnulty College of Liberal Arts, at Duquesne University, in Pittsburgh – with a specialty, in American Politics.

Please join Ken Rice and David Shribman, for this timely discussion, Sunday morning at 8:30 a.m. (NEW TIME, during the NFL Football season), on the “KD/PG Sunday Edition”, on KDKA-TV.

This week’s Pennsylvania Newsmakers features W. Russell McDaid, President and CEO of the Pennsylvania Health Care Association, for an update on nursing homes and long term care. Then, joining host Terry Madonna are Berwood Yost, Director of the Center for Opinion Research at Franklin & Marshall College, and Kyle Kopko, Associate Professor at Elizabethtown College, for a discussion of the presidential election. Link here.

For many years the fields of science, technology, engineering, and math – were areas dominated by male students and employees. But, that is changing, and these areas of study can provide an academically and financially fulfilling career for women.

The Williams Company, the Verizon Foundation, the Carnegie Science Center, and KDKA-TV are all joining forces, to promote an exciting event, to encourage young women to study science, and consider it, as a possible career.

“Girls Rock Science” will be held at the Carnegie Science Center in Pittsburgh, September 24-25th – and visitors will have a chance to talk with women leaders, in the field, and be exposed to areas of study, in the STEM disciplines.

Our guests include Linda Ortenzo – Director of  STEM programs at the Carnegie Science Center, Candace Fly Lee, P.E., PMP – Director the Northeast Project Development, for the Williams Company (a Tulsa, Oklahoma firm that is an energy infrastructure company), and Ryan Savage, Vice President, for Williams.

Then, we’ll introduce you to a new and promising area of study, at the University of Pittsburgh’s Katz Graduate School of Business. The Katz School is now offering an EMBA H – Masters – in Healthcare Management. This is a field with great potential for growth – with particular relevancy for the Pittsburgh economy – which has become more and more powerful as a center for healthcare and medicine.

Our guest is Carrie Leana, Ph.D. – Academic Dean, the George H. Love Professor of Organizations and Management, and Director of the Center for Healthcare Management – at the University of Pittsburgh’s Katz Graduate School of Business.