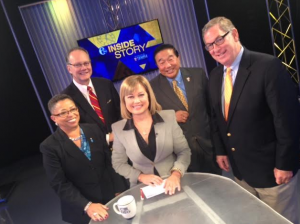 This week our guests are:

Matthew Horace – Nationally recognized security expert who will discuss the Pope’s security and what is happening behind the scenes that might surprise Philly residents. He will also weigh in on whether or not the security plans have gone overboard as former Governor Ed Rendell has suggested.

Fr. Dan Joyce and Bishop Dwayne Royster – Joyce is a Catholic scholar who will discuss the Pope’s message while he is in town. Is Francis the political liberal many claim or a leader who has no intention of changing church doctrine? Royster is a pastor who will discuss the relationship between the officials in the Vatican and the black clergy.

Marjorie Dejoie Brewer, MD and Nazir Alston – Both have sickle cell disease. This is National Sickle Cell Awareness Month. The pair will discuss medical breakthroughs being made and the difficulty of living with the disease.

State Rep. John Payne will be the featured guest. Charlie is here and former Lt. Governor Mark Singel is pinch-hitting for Tony. John Micek of the Patriot-News will also be in studio.

As the excitement builds, host Monica Malpass and this week’s Insiders offer up last minute thoughts on the Papal Visit to Philadelphia. They also discuss the perceived battle between City Council and the School District of Philadelphia, City Controller Butkovitz calling for the resignation of the L&I Chief, plus the reported issues of Diversity and Pay Equality within Philadelphia’s Municipal workforce. The PA Budget impasse that won’t budge and AG Kane going back on her ask to release the pornographic emails involved in her investigation.

WGAL Channel 8 (Harrisburg and Lancaster) Sunday, September 20th at 7:30 AM

What Bayer Corporation discovered, from a special study they commissioned, about the importance of “hands-on” learning – including science, technology, engineering, and math (STEM), in our schools. With dwindling federal and state dollars for education, what can be done by the business community, to give students the classroom skills they need, to insure that there are qualified science employees, in the 21st century?

We’ll talk with Sarah Toulouse – the Executive Director of the Bayer USA Foundation, and head of Corporate Responsibility for the Bayer Corporation – about their “Making Science Make Sense” initiative.

Then, what’s being done, by the Obama Administration, to simplify the often-bureaucratic process for parents to apply for federal student aid, for their children. Point Park University’s Financial Aid Director George Santucci joins us, with some valuable information.

Finally, we’ll tell you why the highly successful, “start-up”, “No Wait” Apps company in Pittsburgh is also one of the “coolest” places to work, in our area. Their co-founder, Luke Panza,  will explain how the modern workplace and employee priorities have changed, and why “No Wait” is a leader, in attracting the best and the brightest, to their firm.