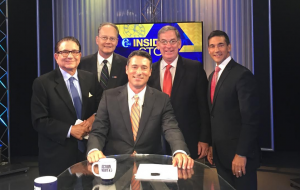 The future of Social Security; an exclusive interview with Tyrone Jones, a man who had been sentenced to life without parole as a juvenile – but who is now free because of a Supreme Court ruling; and “Angel Flight East” – an organization that provides free air transportation to far away doctors and hospitals.

Host Matt O’Donnell and the Insiders discussed the intense national interest in the PA Race for Senate and how Senator Toomey and Katie McGinty are faring in the latest polls. Can the incumbent Toomey win by keeping a Trump endorsement at bay? If Hillary Clinton trends well in PA, will Democrats likely split their ticket? Other topics include the Feds requesting Philadelphia Mayor Kenney’s campaign records in regard to the Electrician Union’s probe, will City Democratic Leader Bob Brady resign, Bruce Beemer is elected acting Attorney General and will those ‘porngate’ emails ever be revealed? Catch the Inside Story…Sunday at 11:30 a.m.

Both Allegheny and Fayette counties are recovering from devastating flooding – one week ago – this Sunday.

Washington Boulevard – where a woman and her three children tragically died in flooding, several years ago – saw massive, flash flooding – again – last Sunday. Police had to rescue families from their cars – suddenly submerged, in flood waters.

While government leaders – on the state and local level – argue about whose responsibility it is – to solve the problem – Pittsburgh Mayor Bill Peduto says the city will now do what is necessary – to protect lives. However, the financial cost – will run into millions of dollars.

Our guests include former Pittsburgh Mayor Tom Murphy – whose efforts to transform another environmental challenge – a slag dump – near Nine Mile Run – resulted in the development of one of Pittsburgh’s most beautiful, upscale and environmentally friendly neighborhoods – Summerset at Frick Park.

Murphy – now, a Senior Resident Fellow for Urban Development at the Urban Land Trust Institute, in Washington, D.C. —  and John W. Stephen III —  attorney, engineer, and environmental consultant to the “Living Waters of Larimer” non-profit organization – talk about possible solutions to the chronic, Washington Boulevard-Negley Run flooding problems – and how to pay for the project.

Then, we’ll examine the overwhelming impact of flash flooding – last Sunday night – in Connellsville and Bullskin Township, Fayette County – and what’s being done, to help those, whose lives were changed, forever, by this tragedy. Many families  — with limited resources – lost everything they owned, and had no flood insurance.

Our guests include Connellsville’s Democratic Mayor Greg Lincoln and Republican State Representative Ryan Warner – working – together – to assist as many people, as they can.

(Please note, that NEXT Sunday – because of the return of NFL Football programming on CBS and KDKA-TV – this program will be moving to Sunday mornings at 8:30 a.m. – through the NFL football season.)

Point Park University continues to transform Downtown Pittsburgh – with its own efforts to establish a “city within a city”. Its campus now includes recreational space, new housing opportunities, and construction of a new Pittsburgh Playhouse – Downtown – and a media center.

We’ll talk with Paul Hennigan, Ed.D. – Point Park University’s President – about these achievements – and what the future holds, for this growing educational institution.

Then, the PPG Foundation and its employee volunteers are helping to bring a splash of color, to charter schools, in sometimes economically-challenged areas. PPG Foundation Executive Director Sue Sloan and Lois Mufuka Martin – Chief Volunteer Engagement Officer for the United Way of Southwestern Pennsylvania – join Jon Delano, to talk about their efforts to create “Colorful Communities” – including Pitcairn, Pennsylvania’s Propel Charter School.

Finally, Wesley Spectrum – a local, non-profit organization that provides autism and behavioral health assistance to children and youth, in Southwestern Pennsylvania – is the recipient of some “young blood” – on its Board of Directors. We’ll introduce you to Abby Geisel – a Fedex employee – who is part of Wesley’s “Junior Board” – and Wesley’s Chief Program Officer Pam Weaver – and learn about an event – this coming week – that is a result of their efforts: a “Night for Autism” – Wednesday, September 7th – at Wigle Whiskey Barrelhouse and Whiskey Garden, on Pittsburgh’s North Side.