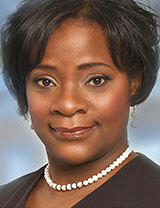 Judge Paula Patrick was endorsed by the Pennsylvania Republican Party for a seat on the state’s Superior Court. PoliticsPA spoke to Patrick about her career as a judge and what the endorsement of the GOP means to her.

“I became a judge because I wanted to serve.” said Patrick. “I have always had a lifelong passion to render justice for all people.”

Patrick has served on the Philadelphia Court of Common Pleas since 2004 and has authored over 400 opinions. This endorsement was announced at the winter meeting of the Republican Party of Pennsylvania in Harrisburg.

The forty-nine year old Patrick is not a lifelong Republican, but explained what made her leave the Democratic Party.

“As a black woman born and raised in the South, being a Democrat was just ingrained, almost as though it is on your birth certificate.” said Patrick.

“I became a Republican because I began to research and study both party platforms and beliefs,” Patrick said. “It was at that point that I realized that my core values and beliefs were always more in line with the Republican party than that of the Democrat party.”

Changing party affiliation to become a Republican in a Democratic stronghold like Philadelphia has helped shape Patrick’s career.

“Though my choice was not a popular one, especially being in Philadelphia, I felt it was necessary to be true to who I am,” said Patrick.

“I think for someone to be able to stand up and make that change at a crucial point in one’s own career requires you to be a courageous and independent thinker,” said Patrick. “That’s how I was raised and everyday I exhibit these same traits as I take the bench to do my job each day.”

Patrick ran for Superior Court in 2011 without the endorsement of the GOP, and lost in the primary.

During the last judicial election, the Republicans did not win a single seat, but Patrick sees this year’s election will be different.

“I believe that I, as well as the entire Republican slate will do very well this year,” said Patrick.

“For judges, I believe voters are concerned about integrity, trust, adhering to our Constitution and honoring the law,” said Patrick. “Voters are tired of pay-for-play politics and want judges that hold these same values.”

There are four open seats on the Superior Court.  The Court hears appeals of civil and criminal cases from the Court of Common Pleas, and appeals of cases involving children and family matters.

PoliticsPA is profiling all of the candidates for statewide judicial office.