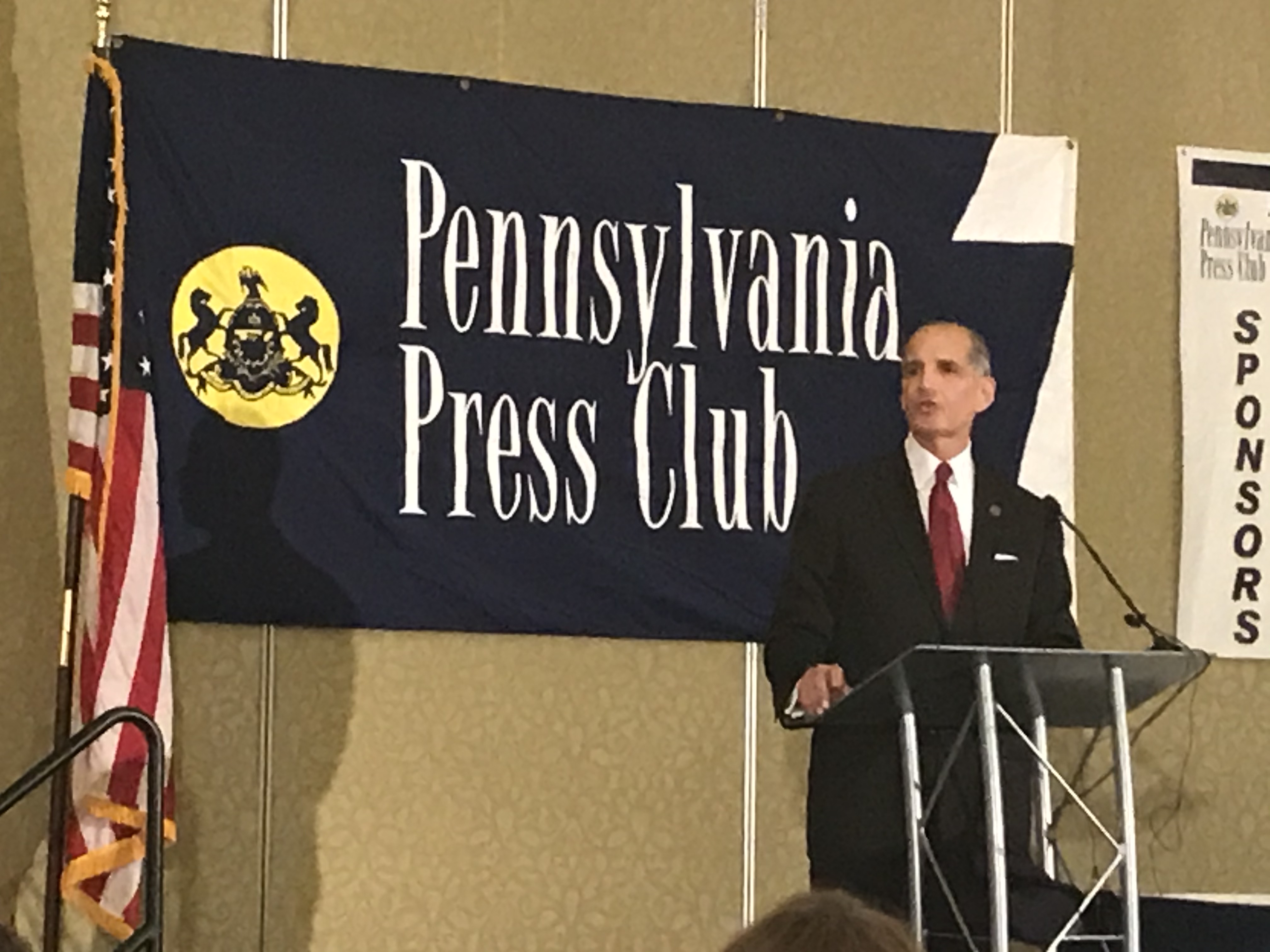 HARRISBURG- Since being elected chair of the Pennsylvania Republican Party in July, Lawrence Tabas has emphasized the importance of keeping the state in the win column for President Donald Trump in 2020. During his first appearance at the Pennsylvania Press Club Luncheon since taking over the reigns of the PAGOP, he praised the effect Trump has had on the state and launched some lofty goals for various 2020 races.

“I know tough challenges,” Tabas, a Philadelphia Republican, said. “Tough challenges don’t frighten me and I assure you today that I am not afraid of supporting and getting President Trump reelected next year here in Pennsylvania.”

Tabas painted a picture of a party united behind Trump, who became the first Republican to carry the state since 1988 by narrowly winning over Sec. Hillary Clinton, and a president with widespread support.

“We have a rockstar as our candidate and as our president,” Tabas said.

Tabas pointed to the crowd sizes at rallies and the current low unemployment rate as proof that there is enthusiasm for Trump to win a second term. Although Tabas lauded the supporters of Trump as an example that the excitement and momentum is in their favor, the president’s approval rating nationwide has remained underwater. The Real Clear Politics average of Trump’s job approval rating stands at 41.9%, while 54.7% disapprove.

Tabas addressed the approval rating for Trump and, in part, pointed the blame at the media for him not receiving higher numbers.

“With all of these successes, why aren’t his approval ratings better,” Tabas said. “With all due respect to all of you here today, it’s in my view because the media is underreporting and misreporting the president.”

Tabas said the party will be proactive in spreading his message, which includes supporting his trade and foreign affairs policies, leading into the 2020 election.

While Tabas credited Trump for “inspiring” Americans and making them feel “confident again,” he said the Democratic Party message will be rejected at the ballot box in the coming elections. He claimed that the Democratic Party is only pushing “socialism and impeachment” and that won’t resonate with Pennsylvanians.

“Impeachment is not a winning message for them,” Tabas said. “Impeachment has been there only strategy literally since January 20th 2017, the day the president was sworn in.”

All nine members of Pennsylvania’s Democratic Congressional delegation and Sen. Bob Casey, have issued their support for the impeachment inquiry into Trump after his phone call with Ukrainian President Volodymyr Zelenskiy urgining him to look into former Vice President Joe Biden’s son’s business dealings in the country, became public.

Tabas called the impeachment effort an act of “desperation” and claimed that the data indicates that the public doesn’t support the impeachment effort. A Pennsylvania poll released from FOX43/Susquehanna Polling and Research earlier in October showed that 51% of all people polled believe that Congress’s impeachment inquiry into President Donald Trump has merit, while 46% view it as a political stunt and 3% remain undecided.

While detailing Pennsylvania’s Congressional delegation locked up at 9 members for each party, he said that the party has talked to strong candidates interested in challenging Reps. Madeleine Dean (D-Montgomery), Chrissy Houlahan (D-Chester), Conor Lamb (D-Allegheny), and Susan Wild (D-Chester). In Larry Sabato’s most recent Crystal Ball ratings, he’s placed Wild’s and Rep. Matt Cartwright’s seat as “Leans Democrat,” while the other elected officials Tabas has named were not recognized as competitive races. The National Republican Campaign Committee is currently targeting Cartwright, Lamb, and Wild for 2020.

In 2018, Republicans, who hold the majority in the state legislature, lost seats in the state House and Senate, mainly coming from the suburbs of Philadelphia and Pittsburgh. For 2020, Tabas said that Western Pennsylvania is trending Republican and that they will flip the seats held by Allegheny County Democrats state Sens. Jim Brewster and Pam Iovino. In the southeast region of the state, Tabas pointed to the seats represented by state Sens. Andy Dinniman (D-Chester) and Daylin Leach (D-Montgomery) as winnable.

Tabas recognizes the losses the Republican Party experienced in the suburbs in 2018 and said that it was due to Trump not being on the ballot.

“And the Democrats ran a theme of just anti-Donald Trump in 2018,” he continued. “I don’t think voters really knew who the candidates from their party, they just thought they were voting against Donald Trump.”

When asked if he thought that the Democratic Party’s “anti-Trump message” was successful in the Philadelphia suburbs, he said it would be reversed in 2020.

Tabas was also asked to chime in on the current discussion consuming Harrisburg after Spotlight PA and The Caucus investigation showed that lawmakers spent nearly $3.5 million in hidden campaign spending. As a result of the investigation, state Sen. Jay Costa (D-Allegheny) proposed a campaign finance reform bill, which Senate President Pro Tempore Joe Scarnati (R-Jefferson) has said he “stands with Costa’s goal of strengthening the current law to improve transparency for campaign disclosure in PA.”

Tabas didn’t endorse any specific reform legislation, saying it should be left up to the legislature and said he “supports bipartisan effort” to address the topic.

At the end of the event, it was announced that Lt. Gov. John Fetterman will participate in the next PA Press Club luncheon in November.