Update: We have been informed by Rep. Harris (R-MD) that he introduced H.R. 2484 on July 11th. We apologize for the omission. You can find information about the legislation here. 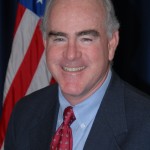 Congressman Patrick Meehan (R-Delaware County)  has unveiled his first proposed piece of legislation, a bill aiming to assist the country’s veterans by “[providing] federal assistance to create Veterans’ Treatment Courts,” according to a statement released by his office on Monday.

Earlier this month, the Democratic Congressional Campaign Committee (DCCC) issued a press release highlighting Meehan’s lack of legislative initiative during his first six months in office.  Despite the freshman legislator’s avid support for job creation and economic prosperity, the piece noted, he had not introduced any measures to vouch for it.

“Pennsylvania families are struggling in tough economic times but Representative Pat Meehan couldn’t even introduce one bill to create jobs and address our nation’s challenges in his first 6 months, and for this taxpayers paid a salary of nearly $87,000,” the DCCC’s Jesse Ferguson said.

In a recent article spotlighting the trio, The Hill noted that “introducing legislation is considered to be one of the primary responsibilities of a lawmaker. Some members will introduce a lot of bills that never move through committees, while others might produce only a few measures that attract co-sponsors and are eventually brought to the floor for a vote.”

Meehan’s announcement came on the heels of the creation of the Delaware County Veterans’ Justice Initiative, which will seek “to connect veterans with treatment and support services, offered through public and private programs that include the County Office of Human Services and the U.S. Department of Veterans Affairs” through the establishment of a Veterans Treatment Court and other initiatives, according to Monday’s statement.  If successful, Delaware County will be the sixth area in Pennsylvania to create a special court for Veterans.

Meehan’s efforts, meanwhile, will seek to ensure that communities across the country can replicate those efforts and help veterans receive the assistance that they need to deter the recent trend of substance abuse and other repercussions of the service.

“I commend the Delaware County Council for their work to ensure that our Veterans get the assistance they need,” said Congressman Meehan.

“It is our duty to make sure these issues are being properly addressed in the courts,” he said.

Meehan’s office was also quick to note that the money for this legislation will come from federal dollars that have already been set aside. No additional spending will ensue.