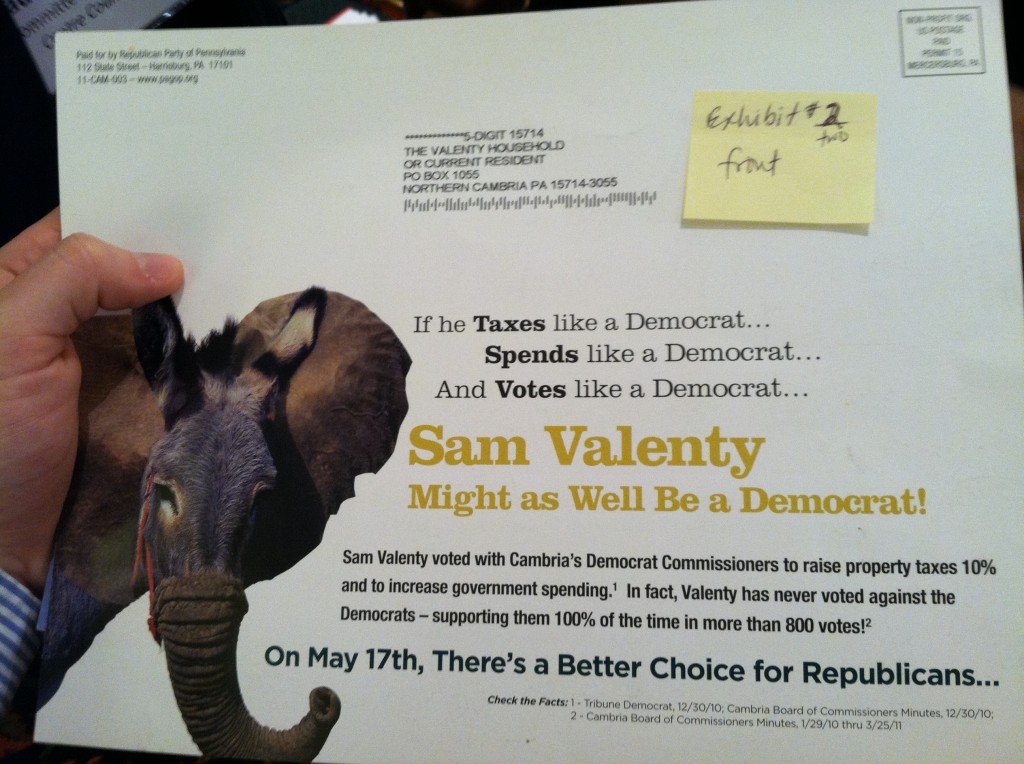 Isn’t that the sort of thing that, according to the bylaws, can get you removed from the Republican party, asked Berks County Committee Woman Cynthia Smith at the Republican State Committee Fall Meeting on Saturday.

Chairman Rob Gleason said, “It’s not an automatic” but rather the “basis from which a charge can be assessed and refereed to a committee who then makes a report.”

Gleason offered to set up a committee to look into the issue. Smith accepted his offer.

Also a member of the Tea Party group Berks County Patriots, Smith was specifically upset about a flier that was sent out to residents of Cambira County that stated that Republican County Commissioner Sam Valenty, “Might as well be a Democrat.”

On the back, the flier presents “Real Republicans for County Commissioner”: Doug Lengenfelder and Mark Wissinger.

In the top left corner it says, “Paid for by Republican Party of Pennsylvania.”

Smith said the state committee has “interfered in quite a few local government politics,” using endorsements to take the primary elections “out of the hands of the voters.”

But Pennsylvania GOP Spokeswoman Valerie Caras said “When county parties make endorsements at the local level, some appeal to the State Party for support. In this case, Mark Wissinger and Doug Lengenfelder were endorsed by the local committee.”

“Considering Sam Valenty’s outrageous 100% voting record with Democrats (that’s 800 out of 800 times), we were happy to work towards electing conservative Republicans to the Cambria courthouse.”

Valenty finished third in the three-way primary, 13.4 percent behind Lengenfelder.