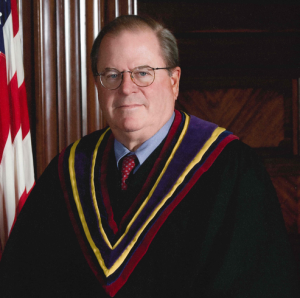 Races for judicial retention typically are among the most boring in the world. But one conservative group says it will contest Republican judges of the Pa. Supreme Court should they decide (eventually) to block the state’s new Voter ID law.

The Independence Hall Tea Party PAC, “warned today that it will organize to defeat Pennsylvania Supreme Court Justice Ron Castille, a Republican, and PA Supreme Court Justice Max Baer, a Democrat, in their respective 2013 retention races, if Voter ID is not implemented in the November, 2012 General Election,” the group wrote in a press release.

“If Judge Simpson does not uphold the law, we will ask Governor Tom Corbett to appeal the case back to the PA Supreme Court,” said PAC President Don Adams. “Bottom line, if this law is not upheld, we will hold Justices Castille and Baer accountable in their 2013 retention election–and, possibly, Governor Corbett in his 2014 primary contest.”

The group is one of Pa.’s largest Tea Party organizations.

Pa.’s statewide judges run for 10 years at a time. After serving a first term, a judge simply needs to win retention – an effort that typically is unopposed and succeeds by a wide margin.

The state’s new law requires voters to present an acceptable form of photo identification. It was challenged in court on the grounds that voters who lack ID must face obstacles in order to obtain it. In August, a Commonwealth Court judge upheld the law. But Tuesday, the Pa. Supreme Court nullified that verdict and instructed the lower court to more thoroughly investigate the availability of photo ID to valid voters.

Most observers believe that the Pa. Supreme Court wanted to issue a temporary injunction to prevent the law from taking effect in time for the November elections – but didn’t want to rule that way explicitly.

The IHTP probably doesn’t have a lot of pull in Baer’s Democratic retention election results, but they could be an added headache for Chief Justice Castille.

Their threat follows a piece by Capitolwire’s Pete DeCoursey, explaining why Castille would be on thin ice should he join the Court’s Democrats in ruling against the voter ID law.

Castille would like to run for retention in 2013, despite being just a year or two shy of the state’s mandatory retirement age of 70. His seat would thus be open in the 2015 cycle.

Republican party leaders are already skeptical, because 2013 would be a great year for the GOP to win an open judicial seat. 2015, the year that Philly local offices go up for the vote, would not be as promising.

If Castille rules against the GOP on Voter ID (or the Marcellus shale case, or redistricting), he’ll be facing an uphill battle for party support for retention.