We’ve all seen the job loss/creation graph. The Obama campaign’s most highly-touted visual aid makes its television debut today in the ad “Reverse.” The entire spot focuses on that illustration of job creation during his presidency.

The ad is simplistic: silent save for soft music, it features a tidy, aesthetic infographic. The quiet, 30-second spot establishes a calm, level-headed tone that aims to give weight to the campaign’s argument. 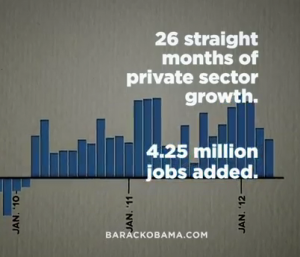 The timeline infographic in the spot firmly locates job losses and economic decline before Obama’s presidency, and recovery occurring only once he had taken office. Instead of the rampant unemployment we had before, the ad says, Obama has given us “4.25 million jobs added” and “26 months of private sector growth”.

The successes highlighted by the ad are Obama’s American Recovery and Reinvestment Act of February 2009, the moment when the “Auto Companies [were] Rescued” (when, in March 2009 Obama granted GM and Chrysler additional time to restructure) and the Small Businesses and Payroll tax cuts of 2010.

The ad goes so far as to suggest that to fail to re-elect Obama is to risk a return to economic failure, and ends with the words “Do we really want to reverse course now?”

“While we’re moving in the right direction, we have much more work to do. President Obama is working to move Pennsylvania and our country forward and grow an economy that’s built to last, where hard work pays off and responsibility is rewarded, where everyone has a fair shot and does their fair share, and everyone from Wall Street to Main Street plays by the same set of rules,” she said.

The ad appears to be an attempt to refute arguments that the President has worsened the recession – though the unemployment rate is higher than when Obama took office (7.8 percent in January 2009, 8.1 percent in April 2012).

Update: Romney’s campaign noted that unemployment has remained above 8 percent for 39 straight months, and that the number of Americans who are underemployed or have stopped looking for work is much higher than the unemployment rate suggests.

“Pennsylvanians and all Americans have waited for too long for President Obama to keep his campaign promise to repair our economy,” said campaign spokeswoman Sarah Pompei. “They know things aren’t better than they were four years ago, and that too many middle-class families are still struggling.”

“Reverse” also seems to be a rebuttal of Romney campaign’s two most recent TV ads, “Day One” and “Day One – Part Two,” which detail what his first actions as President would be (second ad is below). In the words of Frank James of NPR, the Romney ads are “preoccupied with actions aimed at reversing President Obama’s agenda.”

Romney campaign’s “Day One – Part Two” slams Obama on the economy and jobs:

It is not clear whether the ad is airing in Pennsylvania.