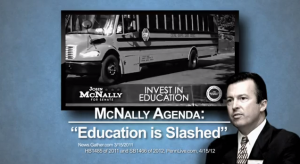 “John McNally claims to support schools, but he actually supported an agenda that cut education by nearly a billion dollars,” says Teplitz, narrating the ad. “That will force kids to attend failing schools, and property taxes to skyrocket.”

Teplitz is Chief Counsel to the Pa. Auditor general; McNally is a partner in a local law firm. Both men are vying to replace outgoing Sen. Jeff Piccola (R-Dauphin).

In the general election, including in his first TV ad, McNally has said he would fight his party on education cuts.

“Rob Teplitz ought to be ashamed of himself and his campaign for attacking me about something he knows is untrue.  As I have said since the beginning of this campaign – I support increasing dollars to public education while increasing accountability, empowering parents, and reforming the status quo,” he said.

It’s almost the exact same dispute as has played out in the state Senate race in Erie. There, the Democratic candidate has accused the Republican of supporting Gov. Corbett and cuts to education while the Republican fervently denies it (in fact, the consultants are the same in both races).

There’s one difference in McNally’s case: he had to win a contested GOP primary. Of McNally and his two opponents, the Patriot-News reported in April, “all support Gov. Tom Corbett’s major budget decisions to [d]ate, including cuts in education and other areas.”

That’s the article Teplitz cited in his ad.

“He has stated his belief in a voucher program on multiple occasions, and supported Tom Corbett’s education cuts,” said Teplitz Campaign Manager Victor Wills. And as Dauphin County GOP Chair, McNally worked to elect Corbett in 2010.

But McNally insists that his emphasis on education funding is where he truly falls on the issue.

“He has heard me say that I would stand up to leaders of both parties to make it happen, including in a recent article by Capitolwire,” McNally said. “I guess Rob’s desire to win a campaign means more to him than telling the truth to voters. That’s sad for Rob.”

As a side note, even if McNally said he did support Corbett’s budgets, most Republicans would contend that there haven’t been cuts to education. Rather, they say, the state has increased its share of education funding. The dropoff is a result of expiring federal stimulus funding.

McNally and numerous other non-incumbent Republican candidates aren’t taking up that message.

Update: McNally’s campaign is on defense. They cut a new ad denying the charge made by Teplitz’s spot; it begins airing Wednesday night. Here’s the new ad:

Update 2: The Teplitz camp kept on the attack. Wills said of the new ad, “John McNally can’t Etch-a-Sketch away the comments that he made to the Patriot-News during the primary campaign. He told the Patriot-News and Republican voters that he was supportive of those cuts. We believe that the voters of the 15th District will see through his flip-flopping and hold him accountable.”