The Best and Worst Ads of the 2012 Primary 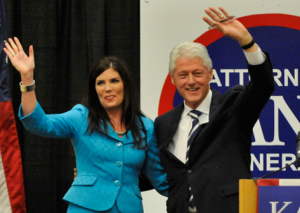 Based on your submissions and conversations with operatives on the ground, here is PoliticsPA’s list of the best and worst ads of the 2012 primary. Includes TV ads, web videos, radio and direct mail.

The criteria is somewhat subjective. In some cases, a piece stood out because it was inherently well done, aesthetic, or clever. In other categories, a piece won simply by being effective – making the difference for its campaign.

There’s no person more popular among Pennsylvania Democrats than Bill Clinton, and this ad simply showcased the former Prez reciting Kane’s campaign talking points (3,000 cases, first woman elected, etc) in his unique style. For the preponderance of voters who only tuned into the campaign in the final two weeks, Clinton’s seal of approval was good enough for them. Simple and effective.

“Corruption in Our Courts”
Tim Holden for Congress, PA-17
Produced by Trippi & Associates

Before he lost his congressional seat, Tim Holden lost the campaign ad war. No bright spot, and the single worst was this one, which implied that opponent Matt Cartwright had bribed a judge. The problem? Cartwright’s client in that case was perhaps the most sympathetic victim imaginable. It precipitated instant backlash (including from Cartwright’s camp, which somehow had a copy of the spot before it went out to TV stations), and led Holden to pull the ad and call for a ceasefire within a day of it being on the air.

Kane’s ads were each very solid, but this one really cut through the clutter. It tells a dramatic story in 15 seconds and reinforced her image as a tough-as-nails woman and prosecutor.

Smith’s TV strategy was all about quantity, so the consistent quality of his ads was a bonus. The visual in this spot is memorable, even though the issue positions are fairly standard Republican talkers.

Mark Critz’s upset win can be attributed to a number of factors including GOTV and labor support, but it would be a mistake to overlook messaging. The Congressman from Johnstown turned the campaign into a referendum on the Balanced Budget Amendment (which Jason Altmire supports) and its supposed impact on senior benefits. This ad effectively dovetailed that hit with Critz’s endorsement from Bill Clinton.

This memorable spot changed the conversation of the Senate race from ‘Steve Welch is a Democrat’ to ‘lots of the candidates have history as Democrats.’ The biggest problem with this ad is that the Welch campaign didn’t have enough money to run it more.

It’s an oldie but goodie. The infamous midnight pay raise is now 7 years removed, but it’s still a headache for lawmakers who supported it – including Rep. Mark Mustio, who sought to move up to the state senate. Raja’s campaign hammered Mustio over the vote, and sent his favorables tumbling down at least 24 points, according to their internals.

“Say ‘No’ to Tim Holden”
Against Tim Holden for Congress, PA-17
Produced by SKD Knickerbocker

There were enough third party ads in PA-17 to constitute their own category on this list. Several groups, including also the Campaign for Primary Accountability and Center Forward, ran spots in the race. This ad, bankrolled by the League of Conservation Voters, stood out the most. It paired Holden with former President George W. Bush and slammed the Congressman for his conservative environmental record. It wasn’t the first time enviros had targeted Holden, but it was the last.

Three-decade-plus Rep. Rick Geist lost his Republican primary on Tuesday by about 180 votes to PSU-Altoona finance prof Joe McGinnis. The Citizens Alliance for Pennsylvania spent about $30,000 to air this spot, which skewers Geist for his two pay raise votes and his vote to increase his pension.

“Separated at Birth”
Steve Welch for Senate
Produced by Brabender/Cox

Even before Steve Welch had the backing of Tom Corbett and the PAGOP, he was on the radar of most statewide and national reporters more than any other candidate. This video is a big reason why. It’s a clever takedown of Sen. Bob Casey’s 2006 campaign promise to be independent of party leadership that scored 40,000 hits on YouTube. One can speculate at the production value, etc, but none can deny it’s a great video.

“The Naked Truth About the Congressman” (NSFW)
John Featherman for Congress, PA-1
Produced by Shoreline One Productions

It would be unthinkable to leave Featherman out of this category. His crafty web videos are legend. This spot features Philly radio host Ruth Weisberg – and little else – discussing Rep. Bob Brady’s record compared to PA-1’s distinction as one of the country’s poorest districts.

Rep. Babette Josephs lost a close primary to Brian Sims, but it wasn’t for lack of creativity. This quirky video shows Josephs walking around her Philly district in her trademark backpack, discussing her record and philosophy in a way that lives up to the title. 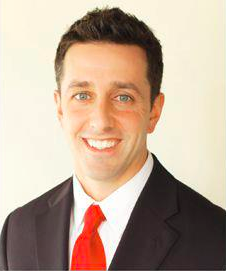 The race to replace retiring Rep. Ed Staback was a nail biter, but at the end of the day newcomer Frank Farina cleared former Lackawanna County Commissioner Randy Castellani by 110 votes. He advertised a lot on TV, and radio as well. This one is typical of several quirky spots Farina had that built on his effective “vote for him because he’s a nice guy” theme.

“Browns and Indians”
Feinberg for Congress, PA-18
Listen to it here.

Evan Feinberg was a longshot to beat Rep. Tim Murphy, but credit to his campaign for thinking outside the box. In this radio spot which aired on 93.7 The Fan, Pittsburgh sports talk, Feinberg noted that Murphy was a native of Cleveland, Ohio and accused him of being a Browns and Indians fan. Murphy’s camp had made an issue of Feinberg’s residence – he’d lived in DC for 5 years before moving back to the district in the fall – so it was a nice defensive move, too. 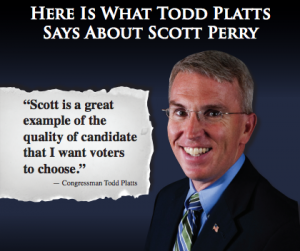 Rep. Todd Platts didn’t make an endorsement in the GOP primary to replace him. But he did offer kind words about a number of the candidates running – including Pa. Rep. Scott Perry, who scored 54 percent of the vote on Tuesday. His wide win was the biggest surprise of the primary, since he’d been outspent by opponent Chris Reilly and supporters. How’d he do it? With a campaign implying he had Platts’ backing. Case in point: this mail piece. 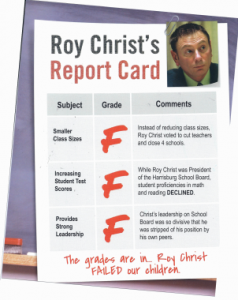 This is a primary race that came down to 45 votes on Tuesday, so one could argue that any little wrinkle might have been the difference-maker. Voters and consultants we spoke to said it came down to this Kim campaign piece, which targeted rival (and second-place finisher) Roy Christ’s service as President of the Harrisburg School Board. A number of people close to the school board situation said the mailer’s claims were false, but the average voter wouldn’t know. 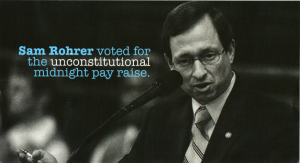 This was the most aesthetic piece of campaign lit we saw this cycle, beautiful in its simplicity. It blasted Rohrer for his 2005 vote in favor of the midnight pay raise, as well as the 2001 pension increase. It’s a good example of the key lesson for any campaign when it comes to direct mail (or most anything): less is more. 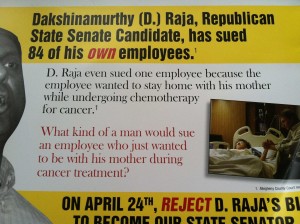 This category has the distinction of receiving more nominations than any other, and this mail piece took them unanimously. Rightly so. It’s not often that a single mailer causes a major newspaper – the Pittsburgh Post-Gazette – to reverse itself on an endorsement. The paper pulled its endorsement for Mustio and backed Raja instead.

“D. Raja” is how Raja’s name appeared on the ballot, and his business, and personally, and basically everywhere. Why would a mail piece highlight his full first name, Dakshinamurthy, when that’s not how it appears on the ballot? To play the race card, the PG concluded (aided by similar themes in other Mustio mailers and TV ads). The blowback forced Mustio’s campaign into retreat and probably contributed to his third place finish.