The Big Redistricting Question: Which Seat Will Go?

Among the states grappling with the once-every-decade process of redistricting, Pennsylvania hasn’t gotten off to the fastest start. But discussions are under way in the constitutionally mandated process of redrawing congressional district lines, and the changes are expected to have consequences locally, statewide, and nationally.

Due to Pennsylvania’s relatively slow population gains during the past decade, it will be losing a seat in the U.S. House, dropping from 18 to 17. In addition, population shifts within the state will require changes to the lines in virtually every district. State Senate and state House lines will also need to be redrawn. In this article we will be focusing on the outlook for the congressional lines. 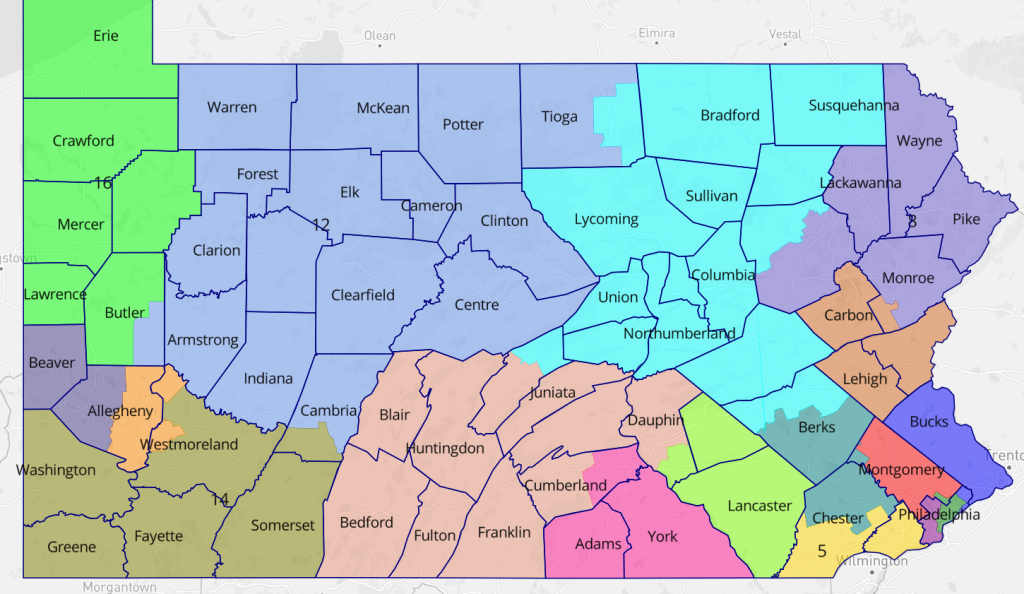 The “Pennsylvania Citizens Map” from Draw the Lines

Under the existing boundaries, the two parties have a 9-9 split in the U.S. House delegation, which seems in tune with an electorate that is closely divided on the presidential level. With the elimination of one district, a tie in the congressional delegation will no longer be possible.

When the previous decade’s lines went into effect in 2012, they had been drawn by a Republican legislature and a Republican governor. As a result, the GOP was able to create a Republican-friendly map that produced a 13-5 Republican House delegation. The map was criticized for some contorted lines, such as the suburban Philadelphia district that was mocked for being shaped like Goofy kicking Donald Duck.

Eventually, the state supreme court – led by a new Democratic majority of justices elected in 2015 – ordered a re-map that enabled Democrats to pull into a tie beginning with the 2018 elections. That tie held after the 2020 elections.

Today, the legislature remains in GOP hands, but the governor, Tom Wolf, is a Democrat. So analysts agree that an aggressively pro-Republican map like the one from a decade earlier won’t be enacted, since it would be unlikely to survive opposition from the governor, the state supreme court, or both.

So far, no formal maps have emerged from the legislature, but discussions are said to be occurring behind the scenes.

This time around, the scrutiny on redistricting will be higher than ever. The Democrats have a narrow majority in the U.S. House – one that could be reversed by a series of unfavorable maps in a small number of states.

In addition, “people are just more aware of the redistricting process because of the pushes for reform over the last decade,” said Kurt Knaus, a longtime political observer in the state and a senior vice president at Ceisler Media (Larry Ceisler is part owner of PoliticsPA.) “Reforms have not taken hold, but those efforts created more public awareness.”

Government officials have taken notice. Wolf has launched a website to collect public input about the new maps, and he established a Pennsylvania Redistricting Advisory Council to offer transparency about the process. Meanwhile, the House’s State Government Committee is convening hearings across the state to gather input from experts and residents and also has a website where residents can submit community map suggestions.

As redistricting begins to take shape in Pennsylvania, here’s a rundown of the demographic and political backdrop.

One obvious factor that will play a role in the shape of the next congressional map is how population has been trending in different parts of the state.

The most “overpopulated” district is the Harrisburg-York-Carlisle-based 10th, currently held by Republican Rep. Scott Perry. It is followed by the Philadelphia-based 3rd, held by Democratic Rep. Dwight Evans.

“The internal demographics in Pennsylvania dictate that without some extreme gerrymandering, the loss of a seat will be located outside of the Southeast,” said Christopher Borick, a Muhlenberg College political scientist.

Republicans “are desperate to figure out how they can compensate for the significant population losses in red counties,” said Marty Marks, a Democratic campaign strategist.

Terry Madonna, a senior fellow in political affairs at Millersville University, agreed that “some analysts think the district to ve eliminated will be in rural Pennsylvania, where population losses have occurred.” He added, however, that “the short answer is, we just don’t know.”

Despite the swirling pressures from the national parties to maximize seat gains in every state, Pennsylvania’s current divide in partisan power makes a replay of the strongly pro-GOP 2011 remap unlikely to be enacted.

Wolf “holds a veto pen, and the legislature doesn’t have the supermajority needed to override him,” said Knaus, who is working with the nonpartisan RepresentUS on constituent engagement in congressional reapportionment. “So clearly he’s an important backstop.”

Meanwhile, the state supreme court has demonstrated its concerns about heavily partisan maps.

“There is a strong possibility that the legislature and Wolf won’t agree, leaving the redrawing of the map up to the state supreme court,” Madonna said.

That said, the court’s willingness to play a role may have limits, Borick added.

“It’s certain there will be challenges, but the supreme court decision to intervene will largely be driven by how far the legislature wants to push,” Borick said. “I think the court very much wants to avoid a deep intervention on the scale of the previous, mid-decade intervention and will be cautious about jumping in if any partisan advantages are modest.”

Given the state’s divided levers of political power, analysts expect that the delegation will ultimately continue to have a close-to-even partisan split, with protections for most incumbents.

In addition to the relatively slower growth in western Pennsylvania, two House members – both Democrats – have announced that they will be leaving their seats after the current Congress. One, Rep. Conor Lamb in the 17th, is running for an open Senate seat, while the other, Rep. Mike Doyle in the 18th, is retiring.

Collectively, Lamb and Doyle represent much of the Pittsburgh metropolitan region; Doyle’s district is one of the most Democratic in the state, while Lamb’s went for Joe Biden in 2020 by just three points, after it narrowly supported Donald Trump in 2016.

The departures of the two lawmakers mean that the remapping of southwestern Pennsylvania won’t have to factor in incumbent protection, potentially creating an opening for major changes in the lines.

Republicans would like to see Doyle’s Pittsburgh-centered district maintain much of its old territory (which would also keep Democratic voters from influencing neighboring districts). Democrats, meanwhile, would prefer to see the district take in additional territory, such as parts of suburban Westmoreland County. This would allow those voters to influence other districts, strengthening the party’s hand regionally.

Whatever happens to Doyle’s district, Lamb’s offers other possibilities.

The most obvious option would be to keep Lamb’s former district winnable by either side, said Jon Delano, the money and politics editor at KDKA-TV in Pittsburgh. That could work as a compromise position: If the rest of the map includes eight Democratic seats and eight Republican seats, the former Lamb district could become a competitive tie-breaker for a narrowly divided state.

A competitive seat, Delano said, “would get the most votes in Harrisburg,” Delano said.

In and around Philadelphia

Another region attracting attention is the southeast, where population has been growing relatively quickly compared to other parts of the state.

Perhaps the biggest district of note is the Bucks County-based 1st district, due to its swingy nature.

The district has been represented by Republican Brian Fitzpatrick, despite being a perennial (and so far unsuccessful) target for Democratic challengers. Democrats would like to strengthen their position by taking in territory beyond Bucks County, where Fitzpatrick’s family is an institution and has been able to survive despite the region’s blue shift. However, such changes would go against the district’s longstanding geographical focus on Bucks County, a tradition that stretches back nearly a century.

The Lehigh Valley and northeastern Pennsylvania

Republican Rep. Dan Meuser’s decision not to seek the governorship and instead run again to represent the 9th district (which includes portions of Berks, Schuykill and Lebanon counties) removed the possibility of one more vacant seat. There’s a lot of uncertainty about where Meuser could end up, but one theory offered by David Wasserman in the Cook Political Report with Amy Walter would have Mueser thrown into a “fair fight” district against a Democratic incumbent, Matt Cartwright. The 8th district represented by Cartwright includes Scranton and Wilkes-Barre, which have been reddening in recent years.

Another nearby incumbent with a relatively tenuous hold on their district is Democrat Susan Wild in the 7th district, which is based in the Lehigh Valley.

A different option floated by Wasserman would have the bluer cities of Easton and East Stroudsburg added to Cartwright’s district, making it slightly Democratic but still competitive, and to have the blue city of Reading added to Wild’s district, also making her district friendlier.

“Cartwright and Wild would be doing backflips if this map passed,” one member of the state’s delegation told Wasserman.

Arguably the biggest remaining question mark in advance of the re-map would concern the 10th district, currently held by Perry.

The district includes Harrisburg, suburban Cumberland County and the city of York, and it has enough blue areas that Perry, a staunch conservative, was reelected by only modest margins in 2018 and 2020. Just as Democrats would like to shore up Cartwright and Wild, Republicans would like to make Perry’s district safer. A compromise map might find a way to accomplish each of these goals.

“It would make sense to come up with a compromise map that the governor can sign,” Delano said. “But that has not happened to date.”

2 thoughts on “The Big Redistricting Question: Which Seat Will Go?”