The Indelible Impact of United Flight 93 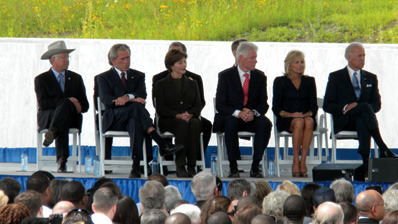 Prominent politicians from across the nation joined families and other dignitaries today in Shanksville, PA to unveil the Wall of Names and to commemorate the lives of the 40 American heroes that died fighting the hijackers aboard United Flight 93 just ten years ago tomorrow.

Former George W. Bush received a standing ovation as he took the stage to contribute to the “living memorial” of the thousands of innocent lives that were lost on 9/11.

“With the distance of a decade, 9/11 can feel like a part of a different era.  For the families of the men and women stolen, some of whom join us today, that day will never feel like history.  The memory of that morning is fresh and so is the pain.  America feels your grief and prays for your comfort and we honor your loved ones,” said Bush in his moving address.

Bush calmly spoke of the innocent men and women that went to work at the World Center, reported for duty at the Pentagon, boarded American Flights 11 and 77 and United Flights 93 and 175 on September 11, 2001 and “did nothing to provoke or deserve the deliberate act of murder that Al Qaeda carried out” that day.

Bush expressed his overwhelming respect and admiration for all of the brave Americans that selflessly risked their lives to rescue their fellow Americans that day.

The passengers and crew of United Flight 93 we’re a diverse bunch filled of promise.  Among them were college students from California, a veteran from New Jersey, citizens from Germany and Japan and a pilot who had rearranged his schedule so that he could take his wife on a vacation to celebrate their anniversary.

When the passengers realized that the plane had been hijacked they gathered in the back of the cabin to devise a strategy.  They conducted a vote and then prepared to “perform their final act.”  They knew the choice they made would cost them their lives.

Many passengers called their loved ones to say goodbye.  One passenger reportedly called his wife and said, “It’s up to us.  I think we can do it.”  Todd Beamer famously led the passengers and crew in reciting the Lord’s prayer before heading to the cockpit for their final act of courage with the words ‘Let’s Roll.’”

If not for the bravery of the 40 passengers and crew aboard Fight 93, the plane most likely would have crashed into the White House in Washington, D.C.

“We’ll never know how many innocent people might have been lost, but we do know this:  Americans are alive today because the passengers and crew of Flight 93 chose to act and our nation will be forever grateful” said Bush.

He continued, “What happened above this PA field ranks among the most courageous acts of American history.”

He celebrated their courage and strength and he emphasized that Americans will never forget their “legacy of bravery and selflessness.”

In Clinton’s heartrending speech he also honored the innocent lives lost on 9/11.  He reminded Americans of the importance of “thanking all those who love them, who keep their memories alive, who raise their children.”

Clinton received a warm applause as he thanked former President Bush, President Obama, Vice President Biden and all those who serve alongside them for keeping our country safe and the members of Congress including House Speaker Bohner for fighting to secure our homeland.

Clinton likened the passengers aboard Flight 93 to the famous 300 Greek Spartans who lost their lives fighting the Persian army more than two millenia ago.  The Spartans knew they were going to die “but the casualties they took saved the people they loved.”

He underscored that the Spartans were different in that they were soldiers.  The passengers and crew of Flight 93 “just happened to be on a plane.”

“With almost no time to decide they gave the entire country an incalculable gift.  They saved the capital from attack, they saved God knows how many lives, they saved the terrorists from some symbolic victory of smashing the center of America.”

“Ordinary people given no time at all to decide did the right thing and I hope that 25,000 years from now, I hope and pray to God that people will still remember this.”

Senator Bob Casey also found hope in the story of the valiant and selfless passengers and crew of Flight 93.

“This is a place of real sadness but it is also a place that reminds us that ordinary Americans faced with the ultimate evil were able to demonstrate remarkable and uncommon courage,” said Casey.

This memorial is the only one of the three memorials to 9/11 that is not fully funded. Yesterday Casey’s bill to allow the memorial foundation sell medals to raise the money it needs to finish the project passed the Senate by unanimous consent.

Clinton joked that now that he’s no longer in office he can afford to do “unfavorable things.”  He said he was shocked to learn that the memorial was short on its fundraising goal.  He and Boehner plan to hold a bipartisan fundraising event in Washington to raise money for the Flight 93 memorial.

The crash site, called Sacred Grounds, is now off-limits to the public.  It will be left untouched and only family members will have access to the grounds.  However, the public may view it from the Memorial Plaza.

Hundred of thousands of people have visited the temporary memorial built nearby in the past 10 years.  It closed permanently on Friday.

Plans for the new permanent memorial include a tree-lined walkway, memorial grove of tress to honor each passenger and crew member, an entry portal along Flight 93’s final path and a Tower of Voices, with 40 wind chimes to represent each of the 40 victims.