It was the February meeting of the Democratic State Committee. Hundreds of party leaders from across Pennsylvania braved the winter weather to choose a candidate to endorse. At one point, Joe Sestak wasn’t even permitted to speak. 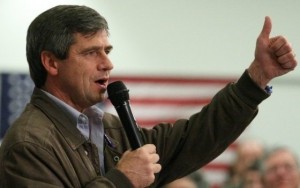 It’s been a long year since then-Representative Sestak lost the committee’s endorsement to Senator Arlen Specter by a 3-1 margin. A long time since Sestak stood on the other side of a rope line featuring Specter, Senator Casey, and then-House Speaker Nancy Pelosi. A long time since, requesting the chance to rebut a dig from Specter during the committee’s dinner, Sestak was summarily waved off by then-Chairman T.J. Rooney.

Indeed, his opposition to the Democratic establishment was a hallmark of Sestak’s primary campaign.

My how things have changed.

Sporting his trademark Navy bomber jacket, Sestak received a hero’s welcome from the committee when he dropped by their most recent meeting on Saturday (video below).

“Why did we ever shut him out?” PoliticsPA overheard one committee member asking. “We hurt ourselves in the long run.”

The change of tune by Democratic committee members is only half the story. All of a sudden, Sestak is actively seeking the favor of folks he dismissed a year ago.

“This is an insider group here . . . and you saw the machinations of the insiders,” Sestak said at the time. “The people are fed up with deal-making. They want a change.”

Now Sestak looks right at home, meeting and greeting those same insiders with ease. His 67-county “thank you” tour” tour took him almost exclusively to local Democratic committees. And the Admiral has openly talked about a future in public service.

Rumors naturally abound any time 400 politicos gather in one building. However, one persistent idea that PoliticsPA heard from several sources, was that Sestak is considering a run for Governor in 2014.

One source said he was in the room with Sestak and his advisers while they discussed a gubernatorial campaign.

Another committeeman loyal to the Admiral, when talking about prospective candidates he might support in 2014, made sure always to add, “unless Sestak decides to get in, then I’m with him.”

Those are two accounts of several.

Hannah Zale, a spokeswoman for the former Congressman, dismissed the speculation.

“Joe went to the State Committee meeting to say thank you for people’s tremendous support during the election,” she said. “He hasn’t focused on his future at all yet, except that he wants to do public service in some way, as he’s done his whole life.”

But then again, Sestak still has a staff.

One thing is for sure: if Sestak does decide to run in 2014 or any other time, he’s ready, willing and able to court support from these Democratic insiders.