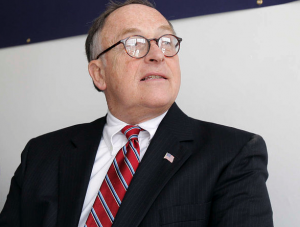 Even as the 2016 elections rage on, some Republicans are keeping an eye on what the party should look like after November.

PA GOP Chairman Rob Gleason’s term expires at the end of the year and Chester County Chair Val DiGiorgio is interested in taking over.

“Right now my focus is on 2016,” DiGiorgio said before clarifying that he is still interested in the top job. He also stated that he would not be averse to running even if Gleason changed his mind and sought another term.

When asked what his goals would be, DiGiorgio responded that the party needs to get back to its roots.

“My appeal would be to work with the grassroots and unify the party,” he said. “We need to do a better job reaching out to party activists and committeepeople.”

Additionally, DiGiorgio cited the need to focus on statewide races and not be solely concerned with the presidential contest.

That message was reiterated by one of DiGiorgio’s prominent backers, State Senate President Joe Scarnati.

Sen. Scarnati pointed to the fact that the PA GOP had won zero out of the last nine major contests as a reason to change tactics.

“I’m head of the SRCC and I’d be out of a job quite frankly if I ran the SRCC the way state committee is running right now,” Scarnati stated.

He went on to say that more needs to be done for candidates running this year in the Senate, Attorney General and other down-ballot races.

“I challenge them to say what they’re doing in those contests.”

Most of all, though, Scarnati seemed to still be upset about the Democrats winning such a large majority on the State Supreme Court last year.

“We can’t dismiss that the last round of fundraising was horrible and has left us with the most liberal Supreme Court in state history,” he said. “Somebody’s got to be held responsible for all these losses.”

“We can’t keep on the same course, we need a new course,” Scarnati concluded.

We reached out to the PA Republican Party and they sent the following response: “Chairman Gleason’s top focus is helping our Republican candidates win this November.”