Dispatch from Day 2: The Story of Hillary Clinton (As Told By Bill Clinton) 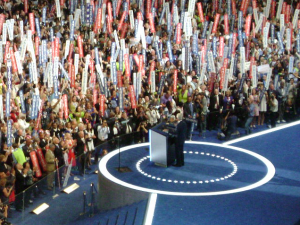 Survey after survey has shown the same thing.

The goal of the conventions is to change that, and the Democratic nominee’s most personal surrogate took the task head on.

First, though, the DNC had to officially nominated Clinton as their nominee.

The roll call had a number of notable moments. Bernie Sanders’ brother Larry was brought to tears when he mentioned how proud his parents would be, before casting his own vote as a delegate for Americans abroad.

Hillary Clinton’s lifelong friend Beverly Everly also was given the opportunity to announce Illinois votes for the former Secretary of State. Clinton, of course, was born in Chicago.

At the end, Bernie Sanders moved to make the nomination unanimous and the party was finally unified after a tumultuous forty-eight hours.

Overall, the audience was much more enthusiastic and considerably less divided than the first day (although that probably had a lot to do with the fact that Sanders’ hardocore supporters walked out).

The second day was also bereft of any major political stars so the Dems used actual movie and TV stars instead like Elizabeth Banks and Lena Dunham. As a result, Tuesday was noticeably more low-key than Monday. Until the main event anyway.

As expected, the 42nd President of the United States delivered the personal case for this wife.

“She’s insatiably curious, she’s a natural leader, she’s a good organizer, and she’s the best darn change-maker I ever met in my entire life,” he declared.

Clinton addressed head-on the disconnect between the private Hillary observers gush about and the public Hillary that leaves voters cold. Unsurprisingly, he placed the responsibility at the feet of the Republicans.

“How did this square with the things that you heard at the Republican convention?,” he stated. “What’s the difference in what I told you and what they said? How do you square it? You can’t. One is real, the other is made up.”