PAGOP Says No Wright Attacks in 2012 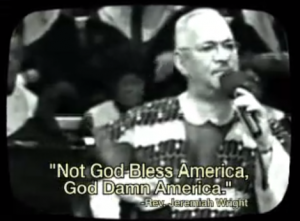 A fair attack, or race-baiting? John McCain muzzled conservatives’ use of Jeremiah Wright, President Obama’s controversial former pastor, for fear that it would increase racial tensions. But in an era of super PACs and decentralized message control, Mitt Romney’s preference might not matter.

The New York Times reported today that conservative billionaire Joe Ricketts may spend over $10 million to bankroll an attack on Obama – crafted by McCain advisers in 2008 but never used – that highlight some of Wright’s most inflammatory comments.

As the PA Democratic Party noted in an email to reporters, it would be similar to a tactic employed by the PAGOP’s federal committee in 2008, in this video:

“We will be following the lead of our nominee and will be focusing on bigger issues like President Obama’s failed economic record,” he said. “After four years of record debt, unemployment, out-of-control spending and $4 a gallon gas, there are plenty of more important aspects of the President’s failed record we will be highlighting.”

Romney has already repudiated the tactic. He told TownHall:

“I repudiate the effort by that PAC to promote an ad strategy of the nature they’ve described.  I would like to see this campaign focus on the economy, on getting people back to work, on seeing rising incomes and growing prosperity — particularly for those in the middle class of America.  And I think what we’ve seen so far from the Obama campaign is a campaign of character assassination.  I hope that isn’t the course of this campaign. So in regards to that PAC, I repudiate what they’re thinking about … It’s interesting that we’re talking about some Republican PAC that wants to go after the president [on Wright]; I hope people also are looking at what he’sdoing, and saying ‘why is he running an attack campaign?  Why isn’t he talking about his record?'”

Though he has no way to prevent Ricketts or any wealthy donor from making it an issue. His campaign is prohibited from coordinating with Super PACs.

It, “reflects how far the party has drifted in four short years since John McCain rejected these very tactics,” Messina said. “Once again, Governor Romney has fallen short of the standard that John McCain set, reacting tepidly in a moment that required moral leadership in standing up to the very extreme wing of his own party.”

“I felt like the wheels could spin off our whole venture,” David Plouffe wrote in his book chronicling the race.