Update: PoliticsPA spoke to Rep. Tim Murphy (R-Allegheny), who also had concerns about the plan. 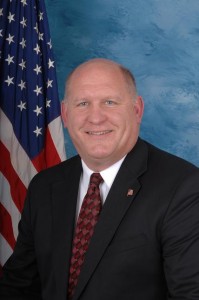 Add two more names to the list of congressmen likely to challenge Tom Corbett over the controversial plan to split Pennsylvania’s Electoral College votes. The Governor has a visit scheduled with the delegation Tuesday afternoon in Washington, DC.

Republican Congressman Glenn ‘GT’ Thompson (R-Centre) isn’t sold on the newly proposed GOP electoral plan for PA.  He admits he’s still looking it over, but he’s sympathetic to the concerns of his swing district colleagues that it would threaten incumbents in the state.

“This is not a time like in the past that the Republican party should be greedy in terms of trying to overreach,” he said at Saturday’s meeting of Republican State Committee in Harrisburg. “That usually doesn’t work.  No matter matter what party overreaches, it usually comes back to haunt you.”

There are currently twelve Republican congressmen from Pennsylvania, and Thompson would like to see it stay that way after the 2012 election.

“I do think that for districts who have a tighter margin that this could make some of our Republican incumbents more vulnerable.  When you look at the deployment of resources by the parties, with the changes that are being talked about this would zero in on I think on districts that you call swing districts or whatever that title would be,” said Thompson.

“There’s probably about 4 or 5 Republican districts that Democrats would want to deploy a whole lot more resources there and less everywhere else,” Thompson said.

Rep. Marino, who also attended Friday’s state committee dinner as well as Saturday’s meeting, said he hadn’t had the chance to examine the issue in sufficient detail to comment given recent flooding in his district.

“I heard about this only within the past 48 hours,” Marino said. “I haven’t had the chance to study the proposal.”

Murphy said he was concerned that the plan would yield congressional races based more on national issues than community ones.

“It’s changing the dynamics of local representation such that, up to this point, a member of Congress runs in their communities that they serve. If it appears that the White House can get another electoral vote in a close election, then the RNC and the DNC move into town and weigh in heavily. Then it ceases to be a congressional race and becomes more of a race for President.”

He cited the case of his friend and colleague Rep. Lee Terry, whose own re-election was jeopardized by that state’s electoral vote-splitting. Murphy also warned of the possible impact on local races.

“I think the state needs to understand also that goes down below there and impacts state Senate and state House races that otherwise represent an area of fifty or sixty thousand people and find themselves now in the midst of a presidential race that otherwise shouldn’t have any play at all in their state house races but it will.”

According to Thompson the “rumors and the rumblings” are that Harrisburg lawmakers will decide on the congressional redistricting first.  Based on Friday reports, he said PA may see a plan as early as October, which would be a speed record for the state.

Since roughly 60% of registered voters in PA’s 5th district are Republican, Thompson is less concerned with his district and more concerned about his fellow Republicans in bluer parts of the state. He said he would support a map that moves Republicans from the eastern parts of his district into those of Reps. Tom Marino and Lou Barletta, where current math is tougher for the GOP.

“My district is currently at R + 9.  I think quite frankly that’s going to go down a bit, but for the benefit of the team I’m okay with that.”