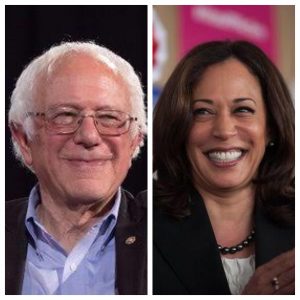 Is it 2020 already? Not quite, but U.S. Sens. Kamala Harris (CA), Bernie Sanders (VT) and Elizabeth Warren (MA) are hitting the road over the next couple of days in Pennsylvania.

Harris and Sanders are viewed by many as 2020 presidential hopefuls. They will be campaigning for the re-election of Sen. Bob Casey and Gov. Tom Wolf, respectively. This weekend, Warren will join Sanders and Sec. Hillary Clinton as the headliners for the American Federation of Teachers convention in Pittsburgh. The AFT, an affiliate of the AFL-CIO, represents 1.7 million members in more than 3,000 affiliates nationwide according to its website.

Tomorrow afternoon, Harris is set to join Casey and other local elected officials in West Philadelphia to discuss the most pressing issues this election cycle for Pennsylvanians and the “far-right agenda” of the GOP.

“The far-right agenda being pushed by Congressional Republicans and their corporate special interest backers makes this election a make or break moment for Pennsylvania’s middle class, and Senator Harris and Senator Casey will discuss the work they’re doing to help eliminate the obstacles holding working families back,” said Terrence Clark, a spokesman for the Casey campaign.

“Only a radical socialist politician from a state like California would be attracted to Bob Casey’s obstruction politics and support for open border policies like sanctuary cities,” said Barletta spokesman David Jackson. “Bob Casey may be the right politician for the people of California, but he no longer represents the people of Pennsylvania.”

Later this weekend, Sanders will be on the trail for the Wolf campaign and headlining the American Federation of Teachers Conference in Pittsburgh.

Sanders will reunite with Lt. Gov candidate John Fetterman, whom he endorsed in his bid in the Democratic Lt. Governor primary, for a rally in Pittsburgh this Sunday.

“Having Senator Sanders campaign for Mayor Fetterman and Governor Wolf shows that, at the end of the day, Democrats have to show up for each other,” said Hannah Jeffrey, Communications Director for the campaign. “We are are all focused on creating good paying jobs, increasing education funding, and improving access to affordable, quality health care.”

The Wagner/Bartos ticket specifically criticized the position of Sanders and Fetterman on “single payer healthcare” and “supporting sanctuary cities” and questioned how Gov. Wolf feels about those specific issues.

“The Governor has not said whether or not he denounces these extreme positions and his silence, at this point, can only be an indication of his continuing support for a massive tax increase and the reduction of public safety,” said PAGOP Communications Director Jason Gottesman. “Campaigning with Bernie Sanders is the latest indication that the Wolf-Fetterman ticket is so far to the left that they have lost sight of the moderate Pennsylvanians who are looking for a hand up, not a hand out.”

The presidential primary won’t arrive in PA until April 2020, but despite being late the Keystone State was strongly contested in 2008 and 2016.