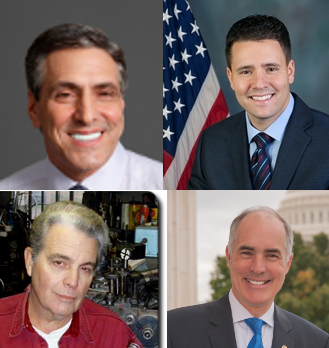 Republicans Lou Barletta, Jim Christiana, and Joe Vodvarka all filed nomination petitions for the U.S. Senate primary, while Democratic Senator Bob Casey filed for his third term in the Senate.

“To have this much support in my first statewide campaign is truly humbling.  Our campaign is working hard to take our message directly to the voters, and I’m inspired by the energy and excitement on our side,” Barletta said.

“I’m proud of the grass roots support our campaign has generated.  “I look forward to taking our message of economic opportunity to every corner of the state and beating Bob Casey in November,” Christiana said.

Vodvarka, who ran as a Democrat in the last two cycles, filed as a Republican after losing in both of his last attempts.

In Barletta’s announcement of his filing totals, he claimed he filed 1,500 more signatures than Casey’s campaign and that Casey did not get signatures from Adams, Carbon, Columbia, Fulton, Indiana, Montour, Pike, Potter, Schuylkill, Snyder, Somerset, Sullivan, Warren, and Wyoming counties.

“We’re honored to have such strong grassroots support from Democrats in every corner of the commonwealth.  Between the outpouring of grassroots donations and the number of petitions we’ve collected, Pennsylvania Democrats are fired up and ready to send Bob Casey back to the Senate to continue the fight for workers, seniors, and the middle class,” Casey’s campaign manager M.E Smith said.

The candidates have until March 13th to review their opponent’s petitions and file any legal challenges to them in court.