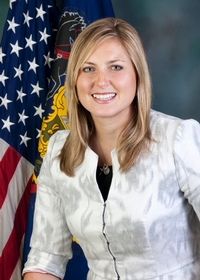 State Rep. Tarah Toohil (R-Luzerne) obtained a restraining order against fellow state Rep Nick Miccarelli (R-Delaware) on Friday, alleging he pointed a gun at her during a 2012 incident.

According to the Patriot News, Toohil is one of the two women who filed a complaint against Miccarelli for physically and sexually assaulting them.

“From the beginning, she was in fear for her life and it was on that basis that the judge issued the temporary order.  A hearing will be held next week to determine whether the temporary order will stay in place,” Toohil’s attorney Terry Mutchler said.

Miccarelli denied the allegations against him, and continued to do so through his spokesman.

“It’s shameful that Toohil would make this move for a PFA without any notice to Nick or any opportunity for him to be heard. The allegations Toohil trumpeted to secure the PFA supposedly occurred six long years ago, yet she never decided to seek any legal relief until now,” Miccarelli’s spokesman Frank Keel said.

“This stunt provides further evidence that political forces beyond Toohil and Nick’s other female accuser are pulling out all the stops to destroy Nick’s good name and end his political career. Nick Miccarelli maintains his innocence. He has done nothing wrong and will continue to fight these outrageous and baseless allegations against him.”

The two women said they did not come forward sooner because they feared for their safety and their careers.

“I have been silent for fear that when this story is released he will kill me, himself and others,” Toohil wrote in the complaint.

“Threats, intimidation and his obsession with violence and firearms causes me great concern for myself and my entire family and coworkers,” she said later.

The order prevents Miccarelli from having any contact with Toohil or being where she lives or works.  It is unclear how this will affect Miccarelli’s ability to participate in upcoming session and caucus business.

As a result of the order Miccarelli will have his firearms confiscated.

Miccarelli has said he will not resign his seat, though Governor Tom Wolf, all eight House Republican leaders, and some Democrats have called for his resignation.

Toohil was planning to go public on Monday with her name because “she feels very strongly as a public official that she has a duty to protect other women and wanted to underscore the complexities and the issues that go along with women and families involved in situations of domestic violence or sexual violence. Obviously with the protection order her name came out sooner” according to Mutchler.