Today, State Rep. Tarah Toohil acknowledged the photos of her with drug paraphernalia in anonymous YouTube video has been circling among staffers in Harrisburg for a week. 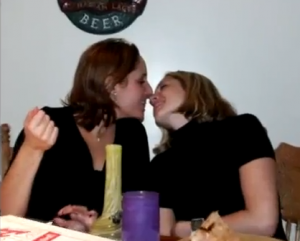 The images also show Toohil leaning affectionately toward another woman. It’s been viewed over 16,500 times.

“Over a decade ago, I was one of the young women in some of those photos. However, I am not that young woman today,” she said in a response video (below) posted on her legislative accounty. “This is a blatant and personal attack against me as a legislator.”

Toohil, 33, is a freshman from Luzerne County. She ousted Majority Leader Todd Eachus in 2010 after switching to the Republican Party. She opposes the decriminalization of small amounts of marijuana.

PoliticsPA tried unsuccessfully to contact the person who posted the video.

Why respond so openly? Toohil said she was genuinely concerned that the video could give young people the wrong idea, especially not her two daughters.

PoliticsPA originally reported that Toohil was seen to be kissing another woman. A second look at the video shows that she was not one of the women kissing in the third photograph. PoliticsPA also changed the headline, originally “Toohil Responds to Photos Showing Her Drug Use,” as the images did not show Toohil actually using drugs.