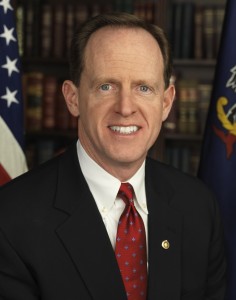 On Tuesday, at the first meeting of the congressional super committee tasked with reducing national spending, Sen. Pat Toomey (R-Pa.) said the group must look to reform the tax code and address  “the big entitlement programs that we all know are driving this fiscal problem.”

“It’s not easy for any of us to do that,” Toomey said. “It means that we’d have to make some real changes, but we can do it in a way that protects the vulnerable members of our society … and still put these programs on a viable, sustainable path.”

Toomey is one of three Republican Senators to sit on the Joint Select Committee on Deficit Reduction, which is tasked with finding at least $1.5 trillion in savings over the next ten years by late November.

The 12-member committee is comprised of three Republicans and three Democrats from each chamber of Congress.

Calling the current code tax code a “national embarrassment,”  Toomey said reforming it was critical since a “simpler, fairer system that has lower marginal rates would encourage economic growth.”

This, in turn, would generate extra tax revenue, he said.

Toomey discouraged the group from only looking to redundant and obsolete programs for savings.

“You know, we could choose to just nibble around the edges of this problem … But if that’s all we do then I would suggest, as I think Senator Portman observed, that we really wouldn’t be doing all that is necessary to put us on a pro-growth and sustainable path.”

The committee will meet again on Tuesday, September 13.