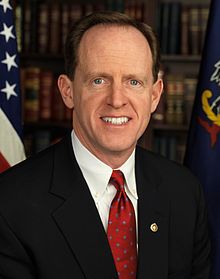 Last Thursday, the Senate voted 58-40 to vote on former Senator Chuck Hagel’s nomination for Secretary of Defense, falling just short of the 60 votes required for cloture.  Senator Pat Toomey (R) was one of many GOP senators who voted against cloture, postponing the vote to February 26th.

Sen. Bob Casey joined all other Democrats and voted to move forward with the Hagel nomination.

Senator Toomey, who voted in favor of confirming John Kerry for Secretary of State, released the following statement regarding his opinion on Hagel:

“The president deserves considerable latitude on appointing members of his cabinet and I have typically supported those nominees including those with whom I have significant policy disagreements. But Sen. Hagel’s shifting positions, questionable performance during the Senate confirmation process and disturbing record on some of the most important national security issues of the day concern me.  In light of these concerns, I will not vote to move to his nomination forward.”

PoliticsPA is seeking comment from Toomey’s office whether he, like some other Republicans, has agreed to vote yes on cloture even if he intends to vote no on Hagel’s nomination.

The resistance to Hagel’s nomination comes mainly from his own party, with which he has had a rocky relationship.  Hagel supported Barack Obama in the 2008 election over John McCain; McCain has been one of the more outspoken senators opposing Hagel’s nomination.

In another departure from party lines, Sen. Hagel supported Rep. Joe Sestak (D) in his 2010 bid for a seat on the US Senate when he ran against Pat Toomey.

“I’m confident that Sen. Hagel will probably have the votes necessary to be confirmed as secretary of defense,” said McCain on Meet The Press this past Sunday.  He and Sen. Lindsay Graham (R-SC) say that despite the probability that Hagel will be confirmed, the prolonged discussion about Hagel’s qualifications enabled them to glean more information on issues such as the Benghazi embassy attack.

Pennsylvania Senator Bob Casey (D) said that he found Hagel to be a “person of integrity” and  issued a statement of support for Hagel last week saying,

“I have studied the Senator’s record and examined concerns raised by many respected defense and foreign policy experts.  I engaged closely with constituents in my state and leaders in the pro-Israel community.  I met with the Senator to discuss his nomination and press him on host of security issues including Iran, the U.S. relationship with Israel, Syria, Afghanistan and Pakistan. In this meeting, I received important assurances on his views with respect to U.S. policy on Iran and Israel.  On the basis of this process, I have decided to support his confirmation to serve as Secretary of Defense.”