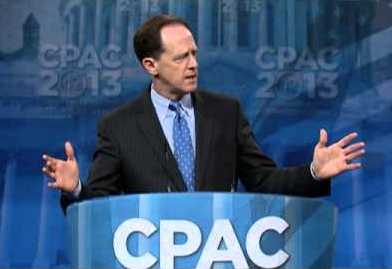 National Harbor, MD — Conservative and libertarian activists from all over America gathered just outside Washington, D.C. this weekend to hear from leaders in the right wing. The Conservative Political Action Conference is an annual conference hosted by the non-profit American Conservative Union Foundation.

Sen. Pat Toomey and former senator Pennsylvania Rick Santorum were among various political figures to address the conference attendees on topics such as fiscal concerns and social values. Excluding the late Republican-turned-Democrat senator Arlen Specter, Toomey and Santorum are the last two GOP senators to represent the commonwealth in the upper chamber.

Toomey spoke early in the conference on Thursday morning. His speech focused primarily on the current debate in Washington over how to cut government spending, and was received warmly by the crowd.

He declared that “we have gone on a spending binge” and “the biggest impediment [to economic growth] we have today is a big, bloated government.”

Pennsylvania’s junior senator characterized the recent budget battles as a fight between the center-right and the left. “It was the left that got us into this mess,” he claimed.

Toomey implied that conservatism lost some ground in 2012 due to a lack of a coherent fiscal message; referencing President Obama’s campaign success he said, “we never had an alternative compelling narrative.”
Rick Santorum

Former Pennsylvania senator Rick Santorum’s intellectual bombast and firebrand, for which he was famous during the 2012 Republican primaries, was subdued early in his speech.  His tone was somber as he spoke of the death of his young nephew just the previous day.

Santorum, who appeared at times to be on the verge of tears, indicated that he had rewritten his address in its entirety just a few hours prior to the speech.

The speech, laden with historical and perhaps esoteric references, urged conservative Americans to focus their values and “fight for the principles that made this country great. We have to fight for those who are suffering and being left behind.”

“What is the ‘why’ of America? What is the American dream?” the former senator asked. “America is a why, it’s an ideal. It’s a set of principles and values.”

Despite being the most markedly socially conservative speech given at CPAC, Santorum’s address was met with a standing ovation.

Critics of CPAC say that the event is not representative of the conservative movement as a whole.  Straw polls from the conference in the past have rarely been right in choosing the next frontrunners of the Republican party.  CPAC has also been criticized for lacking transparency since the ACU, as a 501(c)4 organization, is under no obligation to publish the names of its donors.

Here are the speeches in full.