Toomey To Vote No on Impeachment 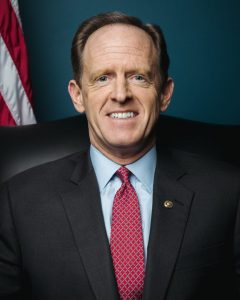 Senator Pat Toomey is officially a ‘no’ on impeachment.

On Tuesday morning, Toomey penned an op-ed for the Philadelphia Inquirer announcing and explaining his decision to vote against the two articles of impeachment against President Donald Trump.

Toomey writes that the president’s actions were not “perfect,” which is something that Trump has reiterated for months over the situation with Ukraine, but didn’t reach the standards met to remove him from office.

“The president’s actions were not “perfect.” Some were inappropriate,” Toomey writes in the op-ed. “But the question before the Senate is not whether his actions were perfect. It is whether they constitute impeachable offenses that justify removing a sitting president from office for the first time and forbidding him from seeking office again.”

Toomey begins the op-ed by quoting then-Sen. Joe Biden in 1999, when the Senate was tasked with considering removing President Bill Clinton from office and his decision voting against articles of impeachment, saying that the actions didn’t justify “overturning an election.” He continues to delve into specific reasons in supporting the acquittal of Trump, joining many of his GOP colleagues.

He ends the piece by writing that the conduct from Trump does not meet the “very high bar required” and said that the American people will ultimately have the final say in November.

“President Trump’s conduct does not meet the very high bar required to justify overturning the election, removing him from office, and kicking him off the ballot in an election that has already begun,” Toomey writes. “In November, the American people will decide for themselves whether President Trump should stay in office. In our democratic system, that’s the way it should be.”

The official decision from Toomey comes one day before the Senate is expected to vote on whether or not to remove Trump from office.

While most Republican Senators were already expected to vote against articles of impeachment for months, Toomey remained in the spotlight in recent months over his decision, specifically when the Washington Post reported last week that Toomey spoke with “several colleagues about possibly summoning just two witnesses to President Trump’s impeachment trial, with one called by Republicans and one by Democrats.”

Later in the week after that report surfaced, Toomey issued a statement that he would not support additional witnesses.

The AP reports that Sen. Bob Casey (D-PA) plans to discuss his decision on impeachment later on Tuesday in a floor speech.

13 thoughts on “Toomey To Vote No on Impeachment”