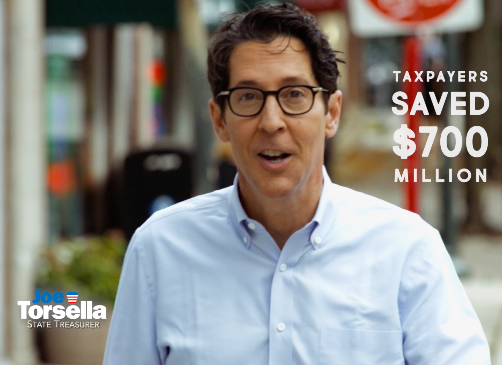 Treasurer Joe Torsella is back on television with a new ad.

Torsella takes the lead in the 30 second ad titled,“Rigged” in which he rails against Wall Street, while promoting his record since being elected to the statewide office in 2016.

“Wall Street rigged the system in Pennsylvania,” Torsella says at the beginning of the ad. “They got rich off the pensions of our seniors.”

“As State Treasurer, I fired them, saving taxpayers $700 million dollars,” Torsella continued. “Then I sued the largest banks on Wall Street for overcharging Pennsylvanians. They agreed to pay nearly $400 million.”

“I’m Joe Torsella and I’ll keep fighting to protect your money because some of these guys are always trying to rip us off,” he says at the end of the ad, followed by a voiceover saying that Torsella “leads by example.”

Stacy Garrity, an Iraq War veteran and businesswoman, who is the GOP candidate in the race described the ad as a “piece of creative fiction” and called the incumbent a “career politician.”

The criticism from the Garrity campaign specifically cites investments on the Public School Employees Retirement System Board.

A spokesperson from the Torsella campaign tells PoliticsPA that the ad first hit the airwaves statewide on Oct. 14 and will be up through Election Day.

The lone public poll released of the race showed Torsella in the lead.

A Monmouth University poll showed Torsella leading Garrity by by 6 points, 47-to-41, among registered voters in the state in the race for Treasurer, while 10% are undecided. Torsella holds a 5 point lead over Garrity, 47-to-42, among likely voters in Monmouth’s high turnout model. Torsella’s lead over Garrity shrinks to 4 points, 47-to-43, among likely voters in Monmouth’s low turnout model.

Torsella defeated Republican Otto Voit by 6 points in the 2016 election for the open Treasurer seat.