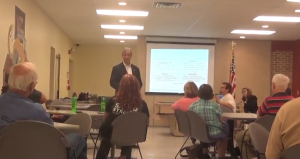 For the first time since 2010, a Pennsylvania Democratic member of Congress has begun being trailed by trackers.

Congressman Matt Cartwright (D-Lackawanna), the only Democrat in Pennsylvania targeted by national Republicans, picked up a tracker at a recent constituent event and was caught talking about Senator John McCain.

In the 23-second clip, Cartwright spoke about the Graham-Cassidy healthcare plan in the Senate and McCain’s possible position on it.

“McCain I’m worried about. Also because the governor of Arizona came out in favor of the Lindsey Graham, Bill Cassidy bill. So that puts pressure on McCain. But man, something tells me McCain, he’s staring death in the face right now, so he’s probably gonna make good choices. He’s not going to bend to political pressure,” Cartwright says.

The clip does not show what Cartwright was responding to, or what he may have said afterwards.

America Rising, PAC that generates opposition research on Democratic candidates, got the clip and responded to Cartwrights comments.

“For Congressman Cartwright to callously use the illness of an American hero for political reasons is both outrageous and offensive. Senator McCain deserves an immediate apology from the Congressman,” America Rising PAC Executive Director Alexandra Smith said.

The fact that opposition research firms are willing to spend the money to send a tracker to film Cartwright shows that Republicans are serious in their desire to flip the seat.  Cartwright has faced Republican challengers in recent years, but has not faced a well financed opponent.

Update: Cartwright released a statement apologize to McCain for his comments.

“I want to express my deep admiration for Senator McCain and gratitude for his service to our nation. I have reached out to apologize directly to him and his family for my statement about his illness, which I agree was insensitive, and which has clearly offended the McCain family. I know he will continue to fight for the people of Arizona and this country during his courageous battle with this disease. I wish him a speedy and full recovery,” Cartwright said.

You can view the clip below.