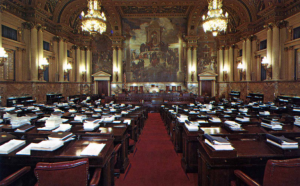 After more than three hours of intense debate on the floor, the PA House of Representatives approved a bill on Tuesday to outlaw elective abortions after 20 weeks.

HB 1948 is a “pro-life bill” that seeks to update the state’s abortion laws to reflect major medical science and technology advances that have made life viable earlier in the gestation period, the bill’s prime sponsor Rep. Kathy Rapp said.

Under the bill, a woman can elect to have an abortion until 20 weeks gestation, as opposed to 24 weeks under current state law. Abortions may only be performed after 20 weeks in cases where the pregnant woman’s life is in danger or a doctor believes the pregnancy will cause “irreversible impairment of a major bodily function of the woman.”

Except in medical emergencies, the doctor performing the abortion must first certify in writing that the procedure is necessary, before receiving written confirmation from a second physician that it is necessary.

As required by HB 1948, the procedure must be performed in a hospital, and the physician must “terminate the pregnancy in a manner which provides the best opportunity for the unborn child to survive.”

A second physician must be present during the procedure to “provide immediate medical care for the child, taking all reasonable steps necessary to preserve the child’s life and health.”

Any physician who performs an abortion after 20 weeks gestation will have committed a third-degree felony under the bill. Performing a “dismemberment abortion” – known medically as dilation and evacuation – at any point in the pregnancy will also result in a third-degree felony charge. Violating any of the procedural requirements will result in a second-degree misdemeanor charge.

The pregnant woman, and all nurses, technicians, pharmacists and secretaries who act under the direction of the physician, will not be held liable for having a “dismemberment abortion” performed.

Opponents of the bill argued that it would force women to make their decision before having many of the prenatal tests run by doctors after the 20-week mark, including some that detect fetal abnormalities and birth defects.

Rep. Matt Bradford “thanked” Rep. Rapp for taking the “cloak” off of the anti-abortion movement in PA by proudly proclaiming her bill a “pro-life” piece of legislation.

“What they’ve not done [before] is admit what they’ve always been about, which is a slow march to undermining the right to a legal abortion for every woman in Pennsylvania,” Bradford said. “Today that march continues, and we do it without the cloak, without the gamesmanship, without hiding behind tragedies or some false sense of women’s health.”

Citing the Supreme Court’s rulings on Roe v. Wade in 1973 and Planned Parenthood of Southeastern Pennsylvania v. Casey in 1992, as well as the preamble to the Declaration of Independence, members on both sides argued existing case law and precedent on state-regulated abortions.

An hour later, the constitutionality of the bill was upheld 140-58, a pre-cursor to the chamber’s final vote on the bill, which passed 132-65.

HB 1948 will now move to the Senate, where it faces an uncertain future. If approved by the Senate, Gov. Tom Wolf has said he would veto the bill.