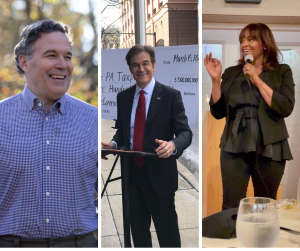 The race for the Republican nomination for the U.S. Senate grows tighter with each day.

A new Trafalgar Group poll released Sunday night shows that Mehmet Oz, Kathy Barnette and Dave McCormick are within the margin of error against each other.

Oz leads the poll at 24.5 percent, while Barnette made a major move into the second position at 23.2 percent. McCormick fell back to third at 21.6 percent but with a margin of error of +/- 2.99 percent, the race is essentially even with a little more than a week remaining.

Oz, the celebrity doctor, received just a 1.8 percent bump since the mid-April Trafalgar poll which was conducted prior to the endorsement of former president Donald Trump. McCormick, the former hedge fund CEO, rose 1.9 percent, while Barnette more than doubled her support from 11.2 to 23.2 percent.

The PoliticsPA average of polls in the race still indicates McCormick with a slight lead over Oz by an 0.5 percentage point margin (18.2 to 17.7).