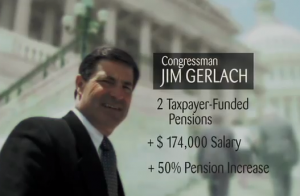 The ad, titled “Oath,” is the first television spot of the 6th district race this year.

While touting Trivedi’s experience as a battalion surgeon in Iraq, the ad criticizes Gerlach for taking “two taxpayer-funded pensions, on top of his $174,000 salary.” The announce also blasts the Congressman for his votes on entitlement programs and for a vote that doubled lawmakers’ pensions when Gerlach was a state Senator in 2001.

Trivedi announced the ad in a fundraising email to supporters.

“With the start of the Democratic National Convention this week, we took the strategy of going up on TV right now,” he wrote. “But the back end of that strategy comes with it a simple rule: When you go up, you stay up. That is where you come in and that is why we need you to make a $6 contribution today.”

The ad is airing on cable across the district and on WFMZ, according to Senior Trivedi Advisor Darren Berringer. It’s a sign that the Trivedi Campaign is taking a conservative approach to their ads and avoiding the expensive Philadelphia broadcast market for the time being.

Gerlach Adviser Vince Galko says that Trivedi’s negative campaigning and radical policies will be his downfall in November.

“It’s hard to take his campaign seriously when he doesn’t even live in this district and can’t even vote for himself,” Galko said. Trivedi’s home in Birdsboro, Berks County, was drawn out of the 6th district last year.

“He used the same negative campaign playbook two years ago and lost by the largest margin of any Democrat candidate before him. What his ad fails to mention are the countless radical positions he’s taken that may win votes where he lives full-time in Washington DC, but would hurt the middle class back here in Pennsylvania.”

Galko said Democratic policies has done nothing for the country’s 23 million unemployed or underemployed workers.

He declined to elaborate on the Gerlach campaign’s television plans beyond saying that its message will be “strong and encompassing”.

The 6th district race, one of Democrats’ top targets in the country, is a rematch from 2010 when Gerlach defeated Trivedi by 14 points. Since then, redistricting has made the seat several points more favorable to Republicans. However, that advantage may be mitigated by a surge in presidential year voting.