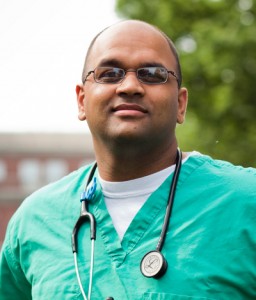 The country is coming into a Presidential election year, PA’s congressional districts are set to shift, the GOP House majority has a track record, and Manan Trivedi has a 15 month-old daughter.

A lot has changed since Trivedi lost to Rep. Jim Gerlach by 14 points last November, but the physician and Iraq War veteran’s resolve to unseat the Congressman remains.

Tom Fitzgerald of the Inquirer broke the news that Trivedi has decided on a rematch against Gerlach. PoliticsPA caught up with the once and future candidate to talk about the challenges he’ll face in 2012.

Gerlach has repeatedly thwarted Democratic efforts to capture his seat, despite the GOP disadvantage in voter registration. He won Trivedi’s home county of Berks by about 14,000 votes – 20 percent – in 2010. Most observers expect that PA’s 6th congressional district will become more conservative during this year’s redistricting process, moving north and west to pick up more rural parts of Berks County.

“No one can predict what the lines are going to look like. It’s a very politicized process, and that’s a shame. All I can do is run the best campaign I can, and focus on the issues that matter to me.”

“That could be something I could leverage. If there’s more Berks County in there. I’m from Berks, born and raised in Berks County. Berks County hasn’t had a congressman since 1992, and I think Berks wants someone who has the county and Reading’s interest at heart.”

Trivedi said he would run against any Republican depending on the final lines. He ruled out a primary to Rep. Tim Holden.

“I’m going to focus on the issues. Regardless of where I am and what district I’m in, that won’t change. But if you look at the map, I’m in the heart of the 6th district. It’s unlikely that will change.”

“I respect Congressman Holden, he’s a good Congressman. I’d challenge him in a basketball game, maybe.”

His 2010 primary opponent, former Inquirer writer Doug Pike, has frequently been seen at Democratic events statewide. However, Pike lives in Paoli in southeastern Chester County, and is expected to end up in the 7th district.

“The electorate has seen what they get with the Republican majority in Congress. It’s out there now. Before it was a vague notion. Look at the Ryan budget. Look at their posturing over the debt ceiling. Look at how they’re running their caucus.”

Trivedi criticized the House GOP for pursuing an “ideological agenda” and not focusing on the economy. He echoed recent Democratic arguments about Rep. Paul Ryan’s budget and its proposed changes to Medicare – which Rep. Gerlach has wholly embraced.

“A subject that’s near and dear to my heart is health care, and Medicare specifically,” he said. “I’m an internist – a primary care doctor at Reading hospital. Most of my patients are reliant on Medicare. If we adopted the Republican plan for Medicare, which Jim Gerlach has endorsed, these people, my patients, would be given a few bucks and kicked to the curb.”

“His vote for the Ryan budget will end Medicare as we know it, and at the same time, continue to give bigger and bigger tax cuts to millionaires and billionaires, and keep large loopholes for big corporations and oil companies.”

“In just the last 12 hours, we’ve gotten so many messages. It’s incredible.”

He said that national and statewide party leaders have been, in a word, encouraging.