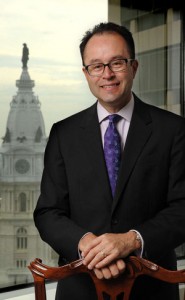 Lawyer Ken Trujillo has not yet committed to running for mayor of Philadelphia in 2015, but he took yet another step forward today in preparation for the race.

Trujillo announced through a press release that he has formed a “Leadership Team” to run his still-not-definite campaign.

“Philadelphians have a unique opportunity to build a true 21st century city that expands our middle class and finally provides the world-class public education our children deserve,” he said. “That is why I’ve assembled a top-flight team of campaign professionals to help me lead a serious conversation with the people of Philadelphia about our future.”

The press release makes no mention of a decision regarding the race, but lists the professionals he has gathered to assist his campaign – if he decides to run.

Trujillo’s “Leadership Team” consists of individuals with ample campaign experience, many of whom have done campaign work for Democrats at varying levels of government.

Trujillo chose Jane Slusser, who worked extensively on President Obama’s re-election campaign in Philadelphia and NEPA, as his Political Director.

Vaughn Ross, who worked on the finance teams of both Senator Bob Casey and previous gubernatorial candidate Rob McCord, will serve as Trujillo’s Finance Director.

Bill Hyers and Jessie Bradley from Hilltop Public Solutions, a national political consulting firm, have also been chosen as part of his team. Hyers won the 2014 Campaign Manager of the Year award from the American Association of Political Consultants for his work in the comeback victory of NYC’s Mayor Bill de Blasio. Hyers and Bradley also worked together on Mayor Nutter’s campaign in 2007.

Trujillo will be using Greenberg Quinlan Rosner Research to perform polling, and has specifically hired Anna Greenberg from the firm. Greenberg is currently the lead pollster for gubernatorial candidate Tom Wolf.

Finally, Snyder Pickerill Media Group will be acting as Trujillo’s strategy and media firm. The firm worked on the campaigns of both Mayor John Street and Governor Ed Rendell.

“It is no secret that it is something that I am interested in and I am also taking all the steps to prepare for it,” Trujillo told the Inquirer in May about a potential campaign. With the formation of a “Leadership Team” with such a good track record, it looks like Trujillo is coming closer to a decision.