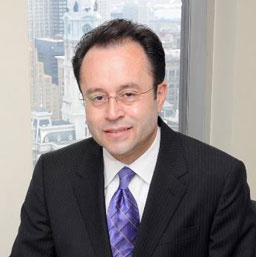 The field to determine the next mayor of Philadelphia grew today with the official entry of Democratic candidate Ken Trujillo.

In statements made Wednesday morning to the press regarding his candidacy for Mayor of Philadelphia, Trujillo outlined the steps he plans to take to “put Philadelphia first again.”

On the steps of The School District of Philadelphia building, Trujillo focused on the need to end state interference in Philadelphia’s public schools.

However, with 550,000 Philadelphia residents considered “low-literate”, Trujillo notes that the state takeover has failed and calls for the elimination of the SRC.

“It is time to give our children the tools they need to succeed by creating universal pre-kindergarten for every child in Philadelphia,” Trujillo said during the press conference. In reference to Philadelphia’s high illiteracy rate, he vowed, “As mayor, I’ll fight to cut the illiteracy rate in half. Illiteracy has to end in our generation.”

This procedure has been questioned In light of a controversial video of two police officers harassing a youth during a stop-and-frisk procedure. The American Civil Liberties Union (ACLU) sued the Philadelphia Police for infringing on citizen’s civil liberties and while the case has since been settled, the controversy continues. Additionally, police are being investigated for racial profiling in the arrest of Christopher Fitzgerald, son of Allentown Police Chief, Joel Fitzgerald.

In recognition of these issue, Trujillo pledges that he will “will fight to end racial profiling by police in this city, and to have a zero-tolerance policy for police abuse. I want our police officers to be outfitted with body cameras to record their interactions, which will improve public safety and create greater accountability. We need to use smart policing, we need to use fair policing, and we need to use technology because all Philadelphians deserve to be safe in their neighborhoods.”

Lastly, as a small business owner himself, Trujillo promises to turn Philadelphia into the “small business capital of the world.” To fulfill this promise, he plans to expand on the Land Bank of Philadelphia to possibly give away “blighted, vacant lots” to small businesses to create jobs to generate new revenue for the city and revive Philadelphia’s struggling neighborhoods.

Trujillo is a Philadelphia-based lawyer who has previously served the city as city solicitor and as an Assistant U.S. Attorney. Trujillo joins Terry Gillen as the two candidates to officially announce their candidacy in the Democratic primary.