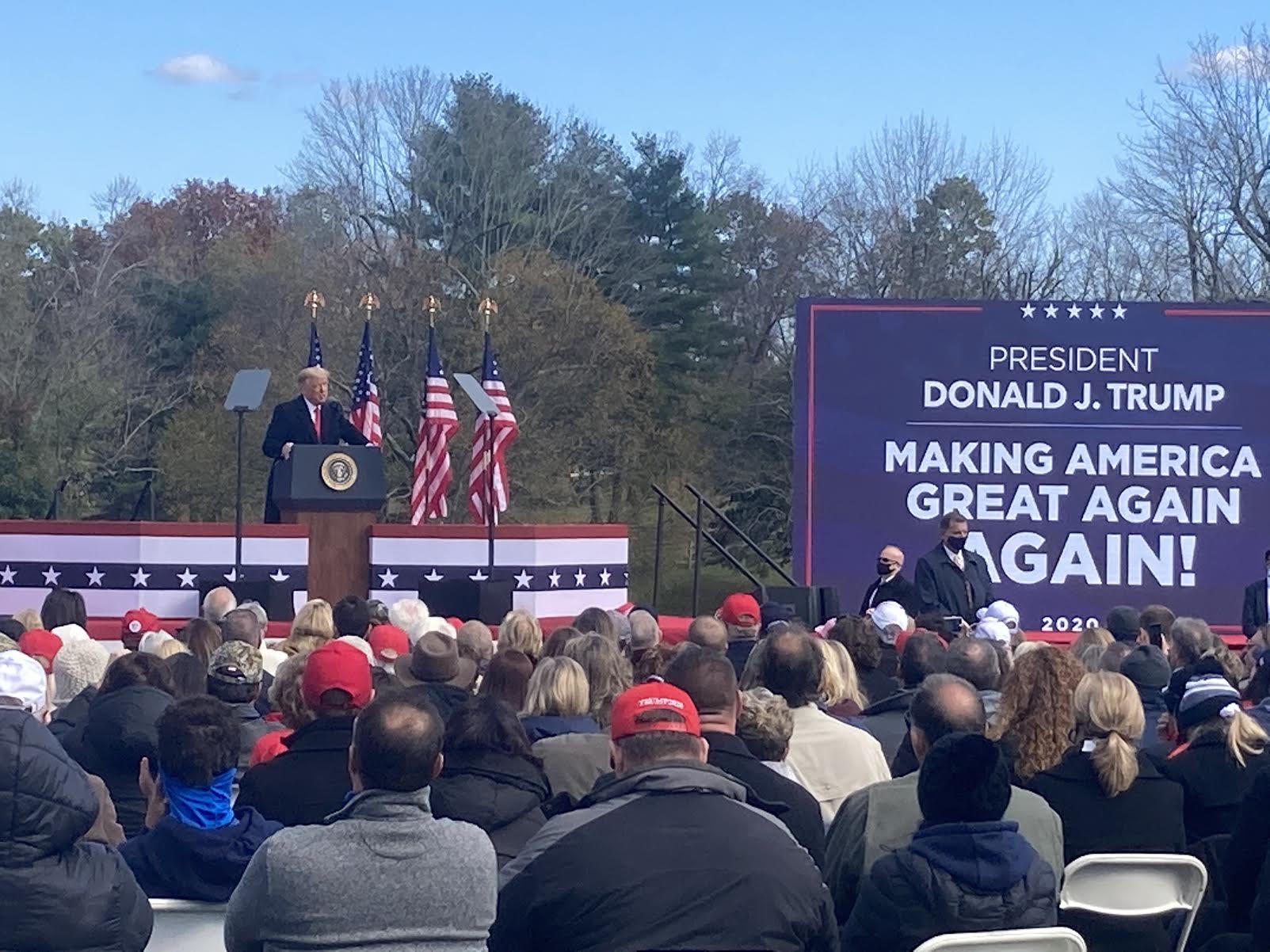 NEWTOWN- “We love this section of the world,” President Donald Trump said on Saturday in Bucks County, during the first of four rallies for the day in Pennsylvania. “It’s a beautiful section.”

Trump and former Vice President Joe Biden’s campaign see Pennsylvania as crucial to securing the White House – which is evident from both candidates scheduling multiple visits to the state in the final hours before the election. During Trump’s nearly 90 minute address to the invitation-only audience at Headquarters Farm, he said that a “great red wave” was forming and accused Biden of being a career politician who stood in the way of progress for Pennsylvanians.

Trump, like he has in many Pennsylvania visits during the campaign, blasted Biden for his previous support for NAFTA, the Trans Pacific Partnership, and other free trade agreements as proof that he “betrayed” the state.

“Here in Pennsylvania, you know the betrayal,” Trump said. “The corrupt Washington class launched an economic war against the state. For decades they targeted your steel mills, shut down your plants, and sent millions of your jobs overseas, all while lining their pockets with special interest cash.”

“And no one embodies this betrayal and treachery more than Joe Biden” Trump continued, which was followed up by “lock him up” chants from the crowd.

In addition to attacking Biden’s policies, Trump said the former VP is “not the smartest guy” and “not a nice person” and claimed that “big-tech” and “the media” are working to help his opponents campaign.

Trump accused Biden of only wanting to talk about COVID-19 during the campaign and claimed that his administration isn’t getting the credit it deserves for responding to the pandemic.

“We’ve done an incredible job and at some point, they’re going to recognize that,” Trump said, talking about his administration’s response to COVID-19. “I’ve said, we’ve done an A+ job, but I give ourselves a D or maybe an F in terms of public relations.”

While Trump boosted his administration’s response to COVID-19, polling has consistently shown that Trump receives strong numbers on the economy, but a majority of voters in the state disapprove of his handling of the pandemic. A Franklin & Marshall College poll released this week that had Biden leading Trump by 6 points in the state, showed 53% said that Biden has the best plan to handle the pandemic, while 31% said Trump did. That same poll also showed that COVID-19 was the most important problem facing Pennsylvania registered voters with 27% selecting the virus as the most important matter facing the state.

Biden’s campaign statement prior to Trump’s address criticized his response to the virus.

“President Trump’s refusal to take COVID-19 seriously or be honest with the American people about the reality of the virus, has cost Pennsylvania thousands of lives and hundreds of thousands of jobs,” Biden said in a release. “Over four years in office, all President Trump has delivered to working families in Pennsylvania are broken promises.”

“As president, I will listen to public health experts so we can safely open our economy and schools,” Biden continued. “I will empower working families in Pennsylvania, create millions of good-paying union jobs, and ensure that everyone has access to quality, affordable health care.”

While talking about voting in the state, he encouraged supporters to “watch what happens in Philadelphia” and complained that the U.S. Supreme Court hasn’t overturned a ruling from the state Supreme Court that extended the mail-in ballot deadline. 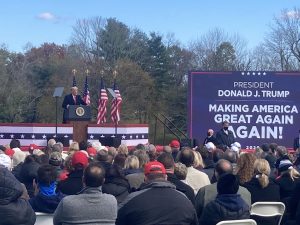 Trump’s blitz across the commonwealth comes at a time when Biden is leading in recent polling, although some polls have tightened in recent weeks. The Real Clear Politics Average shows Biden besting Trump by 3.7 points in Pennsylvania, while FiveThirtyEight’s average shows Biden ahead of Trump by 5 points.

Pennsylvania Republican Party Chairman Lawrence Tabas told PoliticsPA in an interview that enthusiasm is higher now than it was in 2016 and doesn’t believe that the polls are the best indicator of what is going to happen on Election Day.

“I think the enthusiasm is triple what it was in 2016,” Tabas said in an interview.

“The most important number, more important than the poll numbers, are that with the voter registration close,” Tabas said. “We have now reduced the Democrats edge by 205,000 new registered Republicans switching Democrats, we switched 70,000 Democrats alone this year.”

“So that’s more important than the polls with me,” Tabas continued.

Former Lt. Gov. Jim Cawley, who was also in attendance for the speech, told PoliticsPA in an interview that he thinks Trump is in good position to carry the state again, although he’s trailing in the polls.

“I think the president is in the best position he can be to not only win Pennsylvania again, but to once again be the president of the United States for another term,” Cawley said in an interview.

“I think right now there are a lot of people out there, there are a fair amount of people who don’t necessarily trust the polling process and as a result of that we saw this certainly four years ago and I think we’re going to see it again,” Cawley continued. “There was no point at which Donald Trump led Hillary Clinton in Pennsylvania in polling, but yet he won Pennsylvania’s electoral votes on Election night. I think we’re going to see the exact same thing again this year.”

While Trump successfully flipped Pennsylvania in 2016, Clinton won Bucks County by 0.8%. Although the suburbs, like Bucks County, have continually trended towards the Democratic Party in recent years and a Republican presidential candidate hasn’t carried the county since 1988, Tabas thinks that the president can win it this time around.

“I think he has a great shot at carrying Bucks County,” Tabas said to PoliticsPA.

He added that Trump can win the state without carrying the county though, citing expected improvements in two different regions of the state.

“We are doing so much better in the Northeast, and in the northwest than we did in 2016, that they’re going to make up extra numbers for us,” Tabas continued.

Bucks County Chairwoman Pat Poprik stressed the importance of the county during a speech prior to Trump’s address.

“Bucks County,” Poprik said. “We’re the keystone for this election.”

“Last time, we were so close it was sickening,” Poprik said, noting Trump’s narrow loss in the county. “This time, we’re going over the finish line.”

Biden also made a campaign visit to Bucks County last Saturday for a drive-in rally.

Trump’s other rallies in Pa for Saturday were in Reading, Butler, and Montoursville. Biden is scheduled to campaign in Philadelphia on Sunday and other regions of the state on Monday, while Trump is set to hold a rally in Luzerne County that same afternoon.