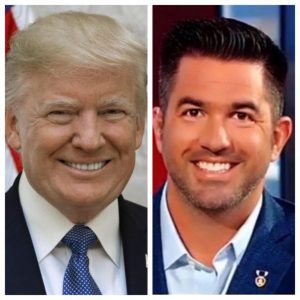 On Wednesday afternoon, Trump announced that he has endorsed Sean Parnell, a combat veteran, author, and former congressional candidate, for the GOP nomination for the 2022 race.

“Sean Parnell is running for the United States Senate to serve the Great Commonwealth of Pennsylvania Sean bravely fought for our Country as a Captain in the U.S. Army and was awarded two Bronze Stars (one for valor!) and the Purple Heart,” Trump wrote in his endorsement. “Unlike our current administration, he never left anyone behind.”

“Sean is a great candidate, who got robbed in his congressional run in the Crime of the Century—the 2020 Presidential Election Scam,” Trump continued. “He will make Pennsylvania very proud and will fight for Election Integrity, Strong Borders, our Second Amendment, Energy Jobs, and so much more. Sean Parnell will always put America First. He has my Complete and Total Endorsement!”

Parnell welcomed the news on Twitter by quote-tweeting Donald Trump Jr. sharing the news, saying he is “so proud” to be endorsed by the former president.

“So proud to be endorsed for US Senate in Pennsylvania by President Trump! In the Senate I’ll always fight for our America First agenda and will never back down to the radical left. Now let’s go Win Pennsylvania and Save America!,” Parnell wrote on Twitter.

So proud to be endorsed for US Senate in Pennsylvania by President Trump!

In the Senate I’ll always fight for our America First agenda and will never back down to the radical left.

Parnell is one of several candidates seeking the GOP nomination for U.S. Senate in Pennsylvania.

In addition to Parnell, Kathy Barnette, a veteran, conservative commentator, and former congressional candidate; Jeff Bartos, a Montgomery County real estate developer who was the GOP Lt. Governor nominee in 2018; Carla Sands, the former U.S. Ambassador to Denmark during President Donald Trump’s administration, are viewed as the other leading candidates for the party’s nomination in the 2022 race.

Sands responded to Trump endorsing Parnell by reiterating her campaign’s commitment to the “America First Agenda.”

“Obviously we would have appreciated the President’s support, but I understand that his son has a long-standing personal relationship with Sean Parnell,” Sands said to PoliticsPA. “I believe the President will be disappointed in this endorsement, similar to how he was recently disappointed with his candidate in TX-6.”

“There is no one in this race that can match my demonstrated commitment to the America First agenda. The incredible people of the Commonwealth of Pennsylvania want proven leadership in the Senate that they can trust to fight for the America First agenda,” Sands continued. “They know that I am that proven business leader and foreign policy expert, at a time when we desperately need both. Yesterday, today, and every day in the future, I am unwavering in my commitment to serving Pennsylvania in the United States Senate. We look forward to having the President on our team in the General Election.”

Craig Snyder, a political consultant and former chief of staff to Sen. Arlen Specter who is also seeking the GOP nomination for U.S. Senate, said that Parnell earning the endorsement from Trump is him “winning the Taj Mahal of political endorsements — bankrupt and blowing up on itself.”

The Pennsylvania Democratic Party said that Trump’s endorsement for Parnell will lead to further in-fighting in the GOP primary.

“Donald Trump’s endorsement has ensured Pennsylvania’s already messy GOP Senate primary will spiral further out of control,” said Jack Doyle, Pennsylvania Democratic Party spokesperson. “Instead of focusing on the issues that matter most to voters in our commonwealth, this field of failed political candidates’ top priority is taking swipes at each other and trying to appease the most extreme, out-of-touch voices in their political party.”

Parnell has emerged as a leading critic of the Biden administration’s handling of recent events in Afghanistan following the terrorist attack in Kabul that resulted in 13 U.S. service members being killed. The GOP Senate hopeful has been making the rounds on conservative media outlets and has called for Biden to resign. Barnette and Bartos have also called for Biden to either resign or be removed from office since the terrorist attack in Kabul.

A recent Franklin and Marshall College poll shows that the race for the GOP nomination to succeed outgoing Sen. Pat Toomey is wide open.

10% of registered Republicans said that they would vote for Parnell as either their first or second choice in the 2022 primary. Barnette is the next Republican with 8% of the vote, followed by Bartos at 7%.

Sean Gale and Sands are locked at 3% each.

63% of registered Republicans polled said that they do not know who they will be supporting for U.S. Senate in the primary, while 6% said someone else.

PoliticsPA is seeking comments from the Pennsylvania Democratic Party and other Republican candidates in the race.

This story was updated with a comment from Carla Sands, Craig Snyder, and the Pennsylvania Democratic Party.