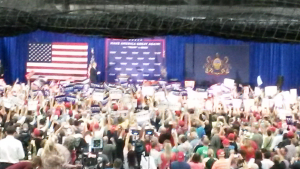 That’s the question everyone asks when they find out you’ve attended an event for the Republican nominee for President.

Put simply, a Trump rally is unlike any other campaign event you’ll experience.

The first example of that was our location. In 2012, Mitt Romney spent the Sunday night before Election Day at Shady Brook Farm in Bucks County. His campaign drew thousands (his team estimated 25,000) and Romney performed better than any GOP nominee since 1988 in Bucks, coming just less than 4,000 votes away from winning it.

According to Matt Schickling of Midweekwire, Trump’s PA Director Ted Christian reached out to RNC delegate Jim Worthington. Worthington is the owner of the Newtown Athletic Club. 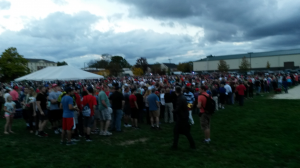 Why does this matter? Well instead of a big farm that could accommodate thousands, Trump’s event occurred on an indoor soccer field. At its peak the building was probably about three-quarters full but make no mistake, plenty of people showed up.

Lines snaked around an open field and swimming area as vendors sold pretzels and swag. The bar at the pool was open, as was the snack bar inside the Athletic Club.

These people were perturbed at standing in line in unseasonably warm weather for hours and I was trying to find the press entrance so I passed on the opportunity to ask them about the man they came to see. Although I did overhear one little girl complain to her father that “Hillary is so mean”.

Once inside, print and online journalists were relegated to the back of the room up a flight of stairs. The view was absolutely atrocious. As you can see, a net hung down from the roof which combined with the metal barricade provided a narrow unobstructed line of vision to the stage.

Half of the upstairs area went to the press and the other half to the overflow crowd. Several of these people asked me to hand over chairs from the press section so they could sit. 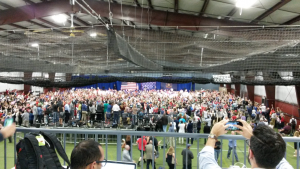 I took this occasion to ask a few attendees when they first decided to support Trump. They all answered that they were won over as soon as he got in the race. One man was a fan even before that. He loved that Trump wasn’t a politician.

At 7:00 on the dot (the rally’s start time was bumped up a half hour earlier in the day), the candidate appeared to the sounds of Lee Greenwood’s “God Bless the USA”.

Trump was arguably low-energy at the beginning. It’s tough to blame him, though, considering his last forty-eight hours. His final debate with Hillary Clinton was Wednesday night, the Al Smith Dinner occurred the next night and this was his third stop of the day.

The crowd didn’t care, though, greeting him with massive cheers.

He spoke without a teleprompter, which he has a love/hate relationship with, choosing instead to riff from notes.

Like any politician, he sprinkled in local references including the Philadelphia Navy Yard, the “Trenton Makes The World Takes” bridge, and his degree from the Wharton Business School.

What separates Trump from the rest of the politicians, though, is the flow of energy at his rallies. You wouldn’t glean much from reading a transcript of his remarks as there’s not much direction and he often repeats himself. Those applause lines, however, feed him energy which he in turn feeds back into the crowd until they finally form a symbiotic relationship.

At one point, Trump even stopped and began to wander just off stage. He walked up to the American flag, opened his arms and gave it a huge hug. The only way I can describe that moment is that I was both completely stupefied yet still saw it coming. The reason I knew what he was going to do of course, is because he’s done it before.

I have to admit it took me awhile to understand just why Trump does things like that but looking back it makes complete sense. The crowd absolutely loved it. Last year I personally saw two other GOP presidential hopefuls give speeches, Scott Walker and Marco Rubio. Walker was boring and left the crowd disappointed. Rubio was brilliant but in the old-school political way and his audience reaction was tepid. Like the man I had talked with explained, they don’t want a politician. They want someone else, an outsider, an entertainer and a showman.

Not long afterward, Trump urged the crowd to turn on us, us being the assembled press.

While asserting that the rise in crime has hit a 45-year high (it hasn’t) he pointed to the cameras in the center of the room and exclaimed “You don’t hear that with these dishonest people back there, meaning the media.”

The people on the floor turned around and booed the TV cameras before a chant of “CNN sucks” broke out. Up top, people who’d had no problem with us before began to shout at us.

“Screw the media!”, “Assholes, assholes!”, “Be honest, be honest!”, “Liars, liars!” were among the statements one man in a “Make Philadelphia Great Again” shirt shouted at us from about ten feet away.

Jeremy Diamond of CNN started to film of the man, which only got him angrier. Eventually, security had to go over and warn the guy to cut it out.

Diamond and the rest of the pool had clearly been through incidents like this before but it was a first for me. What sticks with you is how easy it was for Trump to rile up his supporters.

“Believe me, this is Brexit times five,” he explained during his conclusion.

After one more call to vote and one last pledge to “Make America Great Again” Trump finished almost exactly a half hour in as the Rolling Stones’ “You Can’t Always Get What You Want” started over the loudspeakers.

Trump had connected with the disaffected and stoked the rebellious in a county and a commonwealth that he absolutely needs to win on November 8th. He left quickly, as he had a major event planned Saturday morning in this quest to take back the country. It was an address intended to outline the first 100 days of his Administration.

He would lead his charge at Gettysburg.