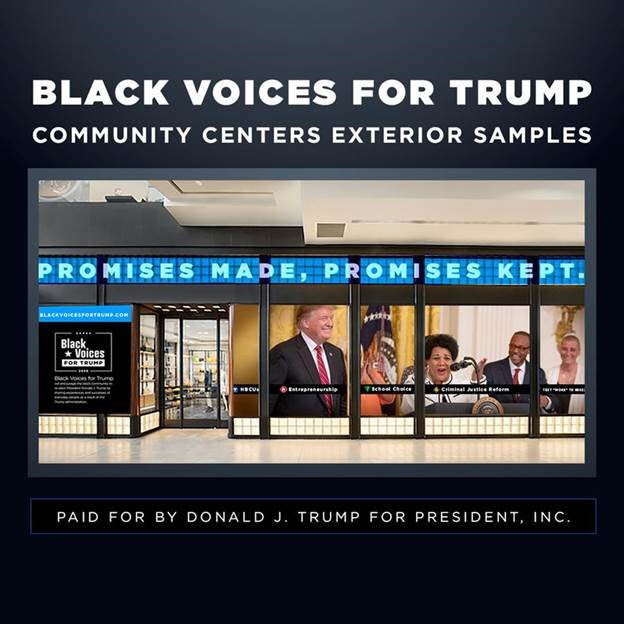 President Donald Trump carried a number of key battleground states in 2016 despite registering in the single digits with African American voters. In 2020, the Trump campaign is hoping to improve on those numbers and is starting the effort by opening 15 community centers across the country, including two in Pennsylvania.

Trump Victory announced plans last week to open Black Voices for Trump Community Centers in seven states across the country, with one office opening in Philadelphia and another in Pittsburgh.

“President Trump and the Republican Party have an outstanding story to tell to Black Americans in Philadelphia and Pittsburgh,” said RNC Spokesman Michael Joyce. “By creating 1.4 million new jobs, passing criminal justice reform, investing record-breaking funds into HBCUs, and expanding school choice for students and families, President Trump has been a true champion for Black Pennsylvanians. Our Black Voices for Trump Community Centers will allow Trump Victory to engage with Black voters in an unprecedented way.”

The press release added that the community centers will serve as a “traditional victory center and home base for the Black Voices for Trump campaign coalition” and aims to tout his administration’s record helping the black community. Various outlets have also confirmed that “Black Voices for Trump” hats and t-shirts will be sold at these locations as well.

The Democratic National Committee said in a statement that Trump doesn’t care about the needs of black voters and will vote in large numbers for the Democratic nominee in November.

“The Trump campaign’s Black outreach is about as genuine as a Ph.D from Trump University. You can’t court Black votes while working to suppress them, you can’t tout Black unemployment that fell at a faster rate under the last administration, and you can’t manufacture Black support while jeopardizing coverage protections for people with preexisting conditions,” DNC National Press Secretary Brandon Gassaway said. “It is the Democratic party that has been in our communities listening to and amplifying our voices while Trump says these areas are rat-infested. Black voters have made clear at the ballot box that they know exactly who Donald Trump is and will do so again in November.”

The Pennsylvania Democratic Party added in a statement that “black Americans are the backbone of the Democratic Party” and that they are “working hard to earn their votes.”

Politico reports that Trump campaign manager Brad Parscale said at a briefing with reporters last week that “at minimum, we’re double from where we were in 2016,” and added that the president’s approval rating goes up “40 to 50 points” when poll tested “directly” instead of “through a media filter.”

An NBC News poll released two weeks ago shows that only 14% of black voters have a favorable view of Trump, while The Hill reports that a Hill-Harris X poll in October showed that 85% of black voters would support the Democratic presidential nominee over Trump.

Trump’s support among black voters in Pennsylvania in 2016 was just a tick down from the 8% national average, with 7% of black voters supporting Trump in Pennsylvania, while Sec. Hillary Clinton received 92% of the vote, according to a CBS exit poll.

In comparison to the 2016 election, the percentage of African American voters was only slightly higher for the Democratic presidential nominee in 2012, when 93% of black voters supported President Barack Obama in Pennsylvania, while then-Gov. Mitt Romney only received 6%, according to a New York Times exit poll. In 2008, 95% of black voters in Pennsylvania voted for Obama, while only 5% voted for McCain.

The last time the Republican presidential candidate earned over 10% of the vote in the African American community in Pennsylvania was in 2004 when 16% of black voters chose to vote for President George W. Bush in the state, while Sen. John Kerry garnered 84%. In 2004, 88% of black voters nationwide supported Kerry, while 11% voted for Bush, according to a New York Times exit poll.