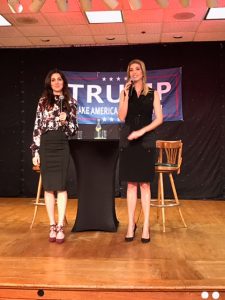 Pennsylvania’s Lieutenant Governor’s race could get an infusion of Trumpism next year.

PoliticsPA has learned that Erin Elmore, a high level surrogate for the Trump campaign, a exploring a run for Lieutenant Governor in 2018.

Elmore was a contestant on third season of The Apprentice, and was fired in week nine. She made multiple appearances in Pennsylvania for the Trump campaign, including a tours with Ivanka Trump in the southeast.

“I am flattered to have been approached by party leaders and those close to the Trump Administration that I consider a run for Lieutenant Governor next year,” Elmore said in an email.

Elmore, a southeastern Pennsylvania native, is currently a political correspondent and spokesperson for Trump.

“Public service has always been of interest to me, and I am willing to do all that to help move forward the agenda and momentum that the Trump campaign inspired in the Commonwealth of Pennsylvania,” Elmore said.

“Erin is a brilliant, articulate and charismatic surrogate for President Trump and would be appealing on any statewide ticket,” Ted Christian, the 2016 State Director for the Trump Campaign in Pennsylvania, said in an email.

Elmore’s relationship with the Trump political organization could help her secure their support, which would help in a contested primary.

“A female candidate from the Southeast who could rally and deliver the Trump electorate would be an asset to whoever the gubernatorial nominee turns out to be,” Christian added

You can see clips of Elmore on The Apprentice below: