Trump Thanks Cutler for Post-Election Maneuvering 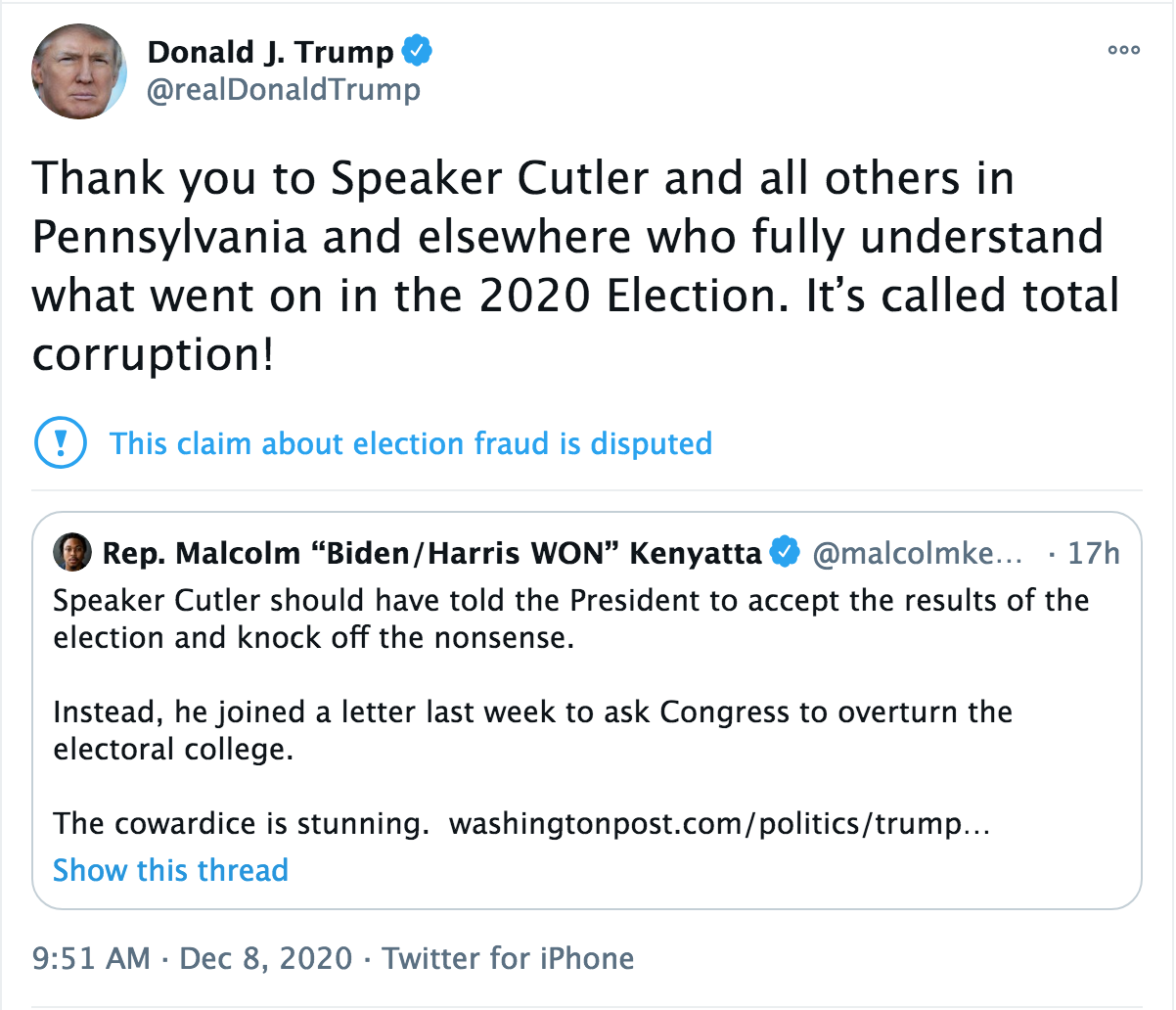 “Thank you to Speaker Cutler and all others in Pennsylvania and elsewhere who fully understand what went on in the 2020 Election. It’s called total corruption!” Trump wrote in the tweet.

Thank you to Speaker Cutler and all others in Pennsylvania and elsewhere who fully understand what went on in the 2020 Election. It’s called total corruption! https://t.co/qqmwh17jOg

Trump’s tweet thanking Cutler was quoting state Rep. Malcolm Kenyatta, (D-Philadelphia) who blasted Cutler over a Washington Post report from Monday night that the president talked to the Pennsylvania Speaker twice during the past week urging the state legislature to dispute the Pennsylvania election results.

“Speaker Cutler should have told the President to accept the results of the election and knock off the nonsense. Instead, he joined a letter last week to ask Congress to overturn the electoral college. The cowardice is stunning,” Kenyatta tweeted on Monday night.

On Friday, Cutler and 60 plus other Republican state legislators sent a joint letter to the state’s congressional delegation urging them to object to the state’s electoral votes going to Joe Biden.

Cutler’s spokesperson, Michael Straub, told the Washington Post that the letter to the congressional delegation was planned prior to the calls that Trump made to Cutler. Straub added that although Trump wanted to know what the state legislature could do to overturn Biden’s victory in the state, Cutler explained that the state legislature had no power to do so and the allegations of fraud would have to be proved in court.

Straub also said that Trump did not “pressure” Cutler during the calls, although he acknowledged that his office has faced a flurry of calls over the past week.

Although Straub’s comment to the Washington Post said that Cutler and the PA legislature can not overturn the outcome in the state, the intentions of the letter, if successful, signed by Cutler and the 60 plus Republicans is to nullify Biden’s victory in the state.

Cutler posted on Monday, Dec. 4, that the letter sent by himself and 60 other GOP lawmakers “does not call for ‘rival electors’ or overturning any results of the popular vote,” but in hopes to delay counting the state’s electoral votes until all of the ongoing legal challengers are resolved.

In fact the letter Cutler and Republicans signed makes no mention of legal challenges and future conditions for approval. It characterizes the Pa. vote as irrevocably flawed and says: “[We signers] urge you to object, and vote to sustain such objection, to the Electoral College votes received from the Commonwealth of Pennsylvania during the Joint Session of Congress on January 6, 2021.”

LNP | LancasterOnline also reports that Cutler agrees with the argument made by state Sens. Ryan Aument (R-Lancaster) and Scott Martin (R-Lancaster) in the paper that there’s no evidence to indicate that fraud helped Biden secure victory, although he pinned the blame on Gov. Tom Wolf’s administration handling of the election.

Sen. Pat Toomey, who congratulated Biden on his victory on Nov. 21 after a federal court in Pennsylvania dismissed a lawsuit from the Trump campaign that challenged the results in the state, is also weighing in on this recent discussion.

In a phone interview with the Philadelphia Inquirer on Tuesday, Toomey slammed Trump’s effort to pressure state lawmakers to overturn the state’s election results as “completely unacceptable” and added that the president’s push will not be successful.