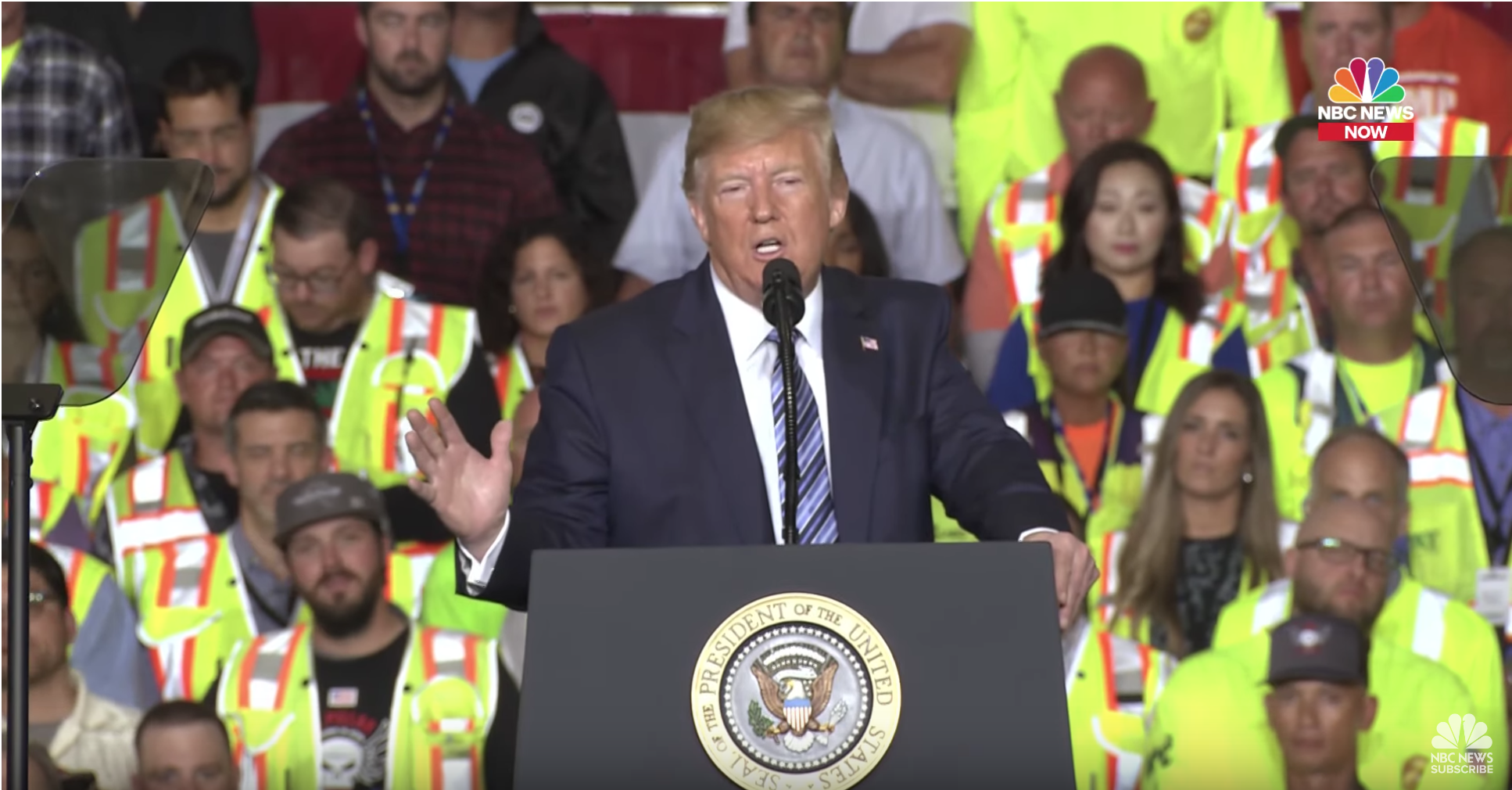 President Donald Trump delivered an hour-long address at an ethane cracker plant being built in Beaver County on Tuesday afternoon touting his administration’s agenda on manufacturing, while making a plea to Western Pennsylvania voters.

“I don’t think they give a damn about Western Pennsylvania, do you?” Trump said according to the AP as he criticized his political opponents on the Democratic side.

The president’s appearance in the state was billed as an official White House event, but various national outlets interpreted the speech from Trump as a campaign-like rally where he spoke to union workers at the facility about his administration’s record on the economy, while blasting Democrats in the process.

Trump boasted about the current manufacturing numbers and took credit for the facility being built in Beaver County.

Great day in the incredible Commonwealth of Pennsylvania today, with the amazing energy workers, construction workers, and craft workers who make America run – and who make America PROUD. No one in the world does it better than YOU! pic.twitter.com/jfWGYjzwkm

“This would have never happened without me and us,” Trump said according to the AP, although Shell announced plans to build the complex in 2012 and the company proceeding to go forward with their plans in June 2016, prior to Trump’s election.

During his address, Trump said that union workers love him, despite not receiving endorsements from them. He called on the union workers in attendance to pressure their bosses to endorse him in the upcoming election.

“I’m going to speak to some of your union leaders to say, ‘I hope you’re going to support Trump,'” Trump said according to the Post-Gazette. “And if they don’t, vote them the hell out of office because they’re not doing their job.”

Trump has been vocal in recent months in pursuing union endorsements. In late April, Trump had a back and forth on Twitter with former Vice President Joe Biden on the International Association of Fire Fighters endorsing Biden’s candidacy for the White House.

Biden’s first public appearance as a declared candidate to union workers at a teamster hall in Pittsburgh, boasted about his support among the unions and painted Trump as anti-union. After the IAFF endorsed Biden in late April, Trump tweeted, “The Dues Sucking firefighters leadership will always support Democrats, even though the membership wants me. Some things never change!”

Biden responded on Twitter prior to the April rally saying he was “sick of this President badmouthing unions” and credited the labor movement for building the middle class.

During the Tuesday speech in Beaver County, Trump credited the tariffs enacted from his administration as a reason for the economy improving in that region.

Trump won Beaver County by close to 20 points in the 2016 election, although the county swung back to the Democrats in 2018 when Gov. Tom Wolf and Sen. Bob Casey both secured victories in the county by a few points over their Republican counterparts.

While Trump spent Tuesday afternoon boosting his administration for residents of Western Pennsylvania, the Pennsylvania Democratic Party and the DNC claimed Trump had broken his promises to Pennsylvanians.

“Only a fool would come into this community, in the midst of a massive economic setback, to gloat about how great things are going,” said Pennsylvania Democratic Party Chairwoman Nancy Patton Mills in a release. “Sadly, Donald Trump is just such a fool.”

Her comment refers to the recent announcement that the Bruce Mansfield Powerplant in Beaver County is expecting to shut down in 2021.

The DNC’s comments accused Trump of trying to “distract and confuse” Pennsylvanians and called out his positions on healthcare and tax reform.

The Pittsburgh Post-Gazette also reports that about 200 protesters showed up to the Beaver County Courthouse during his speech at the new facility.

This was Trump’s first appearance in the state since his rally in Montoursville in May boosting the Congressional campaign of Fred Keller and making the case for implementing tariffs and building a wall at the United States’ southern border.

Vice President Mike Pence has made two stops in the state since June pushing the USMCA, which aims at replacing NAFTA.

The full address from Trump in Beaver County on Tuesday can be seen below.